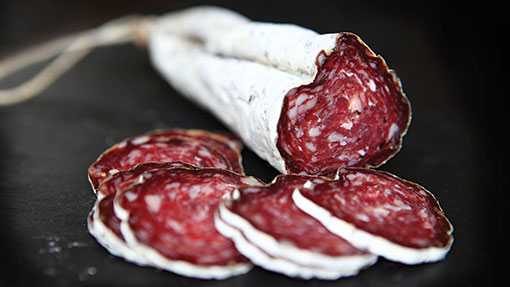 Chorizo has crept into people’s lives in a big way.

Ten years ago the paprika-infused sausage was something that only foodies really knew about. These days you’re hard pushed to find a menu without it popping up in some shape or form.

And it is not just chorizo. The market for the entire range of charcuterie products has exploded in a big way, opening up new opportunities for British farmers. But what’s involved and is it for everyone?

There’s a perception that it is all air-dried hams, chorizo and salami, but the term charcuterie is much wider than that.

Old favourites like pork pies, sausage rolls, black pudding and faggots all come under the umbrella term of charcuterie.

Essentially, charcuterie is a way of preserving raw meat by curing, smoking, cooking – or a combination of the three. Countries such as Spain, Italy and France are probably best known as charcuterie nations, but there is a strong tradition in the UK, too, even if it hasn’t gone by that name.

How big is the market?

It’s difficult to quantify given the huge range of products that fall under the term, how much is used by caterers, plus the fact that no one will be collecting sales figures from the farms and small businesses who are in the market. But latest figures from Kantar Worldpanel, which monitors sales in supermarkets, shows that 1,400t of chorizo was sold in the 12 months to February 2014. We also chomped our way through 3,400t of salami.

So what’s the appeal for farmers?

It’s one of the ultimate ways to add value to pigmeat. An artisan-made salami can retail at the equivalent of £40/kg. A ham hock terrine might go for £25/kg.

Charcuterie products can be made from pretty much every part of the pig, so it uses up some of the cheaper bits that many buyers won’t use. It also extends the shelf life of the product. But it isn’t without its complications – the ongoing drying process for some products mean they get lighter by the day. So while you might start off with 10kg of pork, you’ll end up with 5kg of salami. That all needs to be built into your calculations.

What’s involved in the production process?

Plenty. Charcuterie it isn’t something that should be undertaken on a whim because there can be some important food safety issues to be taken into account.

A cured product like salami is effectively made by fermenting raw meat with a “starter” and curing salt and then drying it out under the right humidity and temperature. Do it wrong and you’ll get bugs and bacteria breeding that won’t do your customers any good at all. Obviously, cooked products are a bit more straightforward, but you’ll still need to meet all the usual environmental health requirements for food production which could require significant investment unless you have the facilities already. Seek advice from people who have been there and done it.

The view from the experts

A man who know more than most about what’s involved in charcuterie is Marc Frederic Berry, who spent two years leading a group of Hampshire farmers though a training programme on the subject.

The Hampshire Charcuterie Project was launched in 2011 by local food group Hampshire Fare and was set up in order to help farmers who at that time were losing £20 a pig.

By diversifying into new products with a longer shelf life, it was hoped the producers would have an opportunity to increase their profits.

The Prince’s Countryside Fund could see the potential of the project proposal and pledged its support through a grant which made the idea a reality. 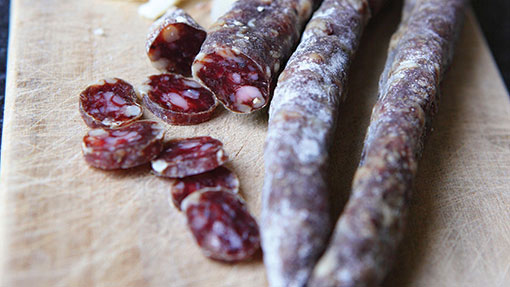 The participants have spent two years learning how to make and package a wide range of charcuterie including chorizo, salami and infused bacon. The group has embraced the opportunity with 10 producers now offering products to buy.

Mr Frederic Berry says British producers have become as good as the continentals at charcuterie, now we realise what’s involved.

“Here we are just learning we have a collective word for what we’ve been doing here for centuries. We’ve just never had a word for it.”

One of the biggest problems, he says, is people assume there are too many barriers in place to push on with a charcuterie enterprise.

Many environmental health officers are unfamiliar with the all aspects of charcuterie production, which means they can raise lots of questions and object to certain aspects like using wooden racks to dry things rather than stainless steel.

“If you are new, you do tend to just take what the EHO says. However, you need to know a bit about the law around historical dispensations for historic recipes.”

For example, people are legally able to sell cooked pies and pasties without refrigeration so long as it is within 24 hours of their production, he says.

Tracy Nash, commercial manager for Hampshire Fare, says the Hampshire Charcuterie Project has been a huge success and a number of businesses are now making quite challenging products as a result of attending.

“It has been hugely valuable and other counties should consider doing something similar. The course gave people an insight into what they could do and has joined a lot of them up together. They were quite isolated before, but now they talk and meet quite regularly even though they are selling the same product.”

The fact that EHOs were not all singing from the same songsheet was an issue that did need to be overcome, she says.

“There is a misunderstanding there and that does need sorting. There needs to be one understanding of what the rules are across the country.”

Customer feedback has been motivating

Sarah and John Mills have been selling salami for just over 15 months after being part of the Hampshire Fare project.

The couple, who farm 72 acres at Parsonage Farm, Upton, had sold boxed beef, lamb, pork, sausages and burgers for many years but when they received an email asking them to join in the Hampshire Charcuterie project they felt it would be a good opportunity.

“The course was really fascinating,” says Sarah. “Over a period of time, we learned about loads of things with Marc. We learned how to butcher the pig and then make products like chorizo, salt beef, pork coppa and others. It really opened my eyes.”

Sarah and John’s first few batches of salami were for home use only while they experimented with recipes and in getting more comfortable with the principles.

Because the product is not cooked, they know that if anything is wrong with it then the customer will be knocking at their door.

“We were originally sending every batch to be microbiologically tested, but that was wiping out much of the margin,” says Sarah. “We are no longer doing every batch because we are getting consistent results.”

The couple already had a butchery facility on the farm so did not have to invest in kitchen facilities. However, they did have to purchase a range of wine fridges, which have been modified in order to dry the salamis out at the right temperature and humidity.

Sarah says they chose to dry their salamis thoroughly as it means the wrong sort of bacteria are less likely to grow. The idea is to lose one-third of the weight as they dry out but most of their salamis go down to half the weight.

They have chosen to market their salami very locally, in keeping with the artisan nature of the product. One incidental benefit of selling direct to customers, pubs and restaurants is that labelling requirements are minimised.

For the Mills, the process of making salami is incredibly satisfying and the feedback for customers has been very motivating.

It has boosted the margin from each pig considerably. Selling a pig as fresh pork they can make a profit of about £65/ a pig, but if they sell each pig as a mix of bacon, salami, pork or gammon the margins can rise to as much as £350 a pig.

“If you’ve got pigs, then there is almost nothing in it [financially] on our fresh pork. However, if you can make bacon, gammon, sausages and other charcuterie then suddenly it becomes worthwhile,” says Sarah.

Emma Higgins of Newlyns Farm Shop, Andover, Hampshire, says bacon and sausages from the farm’s pig herd are a crucial part of their business, which has been open for more than 10 years.

The popular farm shop and café, based on a 500-acre traditional mixed farm, has embraced charcuterie in a big way and now stocks a large range of items including bacon, pork pies, scotch eggs, pork platters and sausage rolls.

One of its other big sellers – ham hock terrine, which sells for £24.99/kg – was awarded first prize in the charcuterie category of the Great Hampshire Sausage & Pie Competition 2013.

All the products are produced by the butchery team or chefs who work for the business, says Emma. And so long as you have a “sensible head” when it comes to dealing with the environmental health aspects, it is achievable.

Such has been the success of charcuterie that it has secured the future of the farm’s pig herd.

“We started down this route as a way of using up the pig carcass but it is getting more and more important to the business. Since the horsemeat scandal there has been a definite trend towards consumers wanting both British and local.”