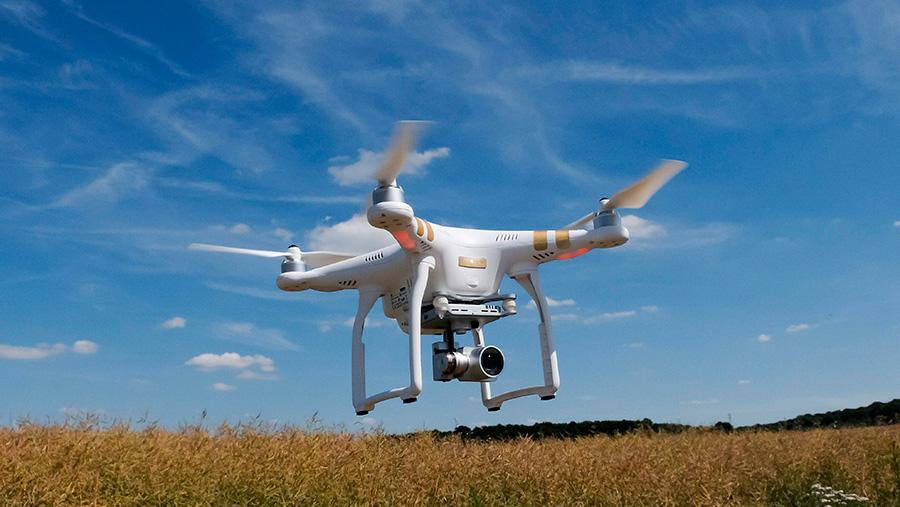 Farmers who are approached by members of the public who want to fly a drone over their farm should ask to see proof of insurance first, according to a leading firm of insurers.

Farmers & Mercantile said from an insurance point of view there were aspects to the use of drones that were still a grey area, but landowners should seek to protect themselves if approached.

“Our advice is that if someone wants to come and use a drone on your land, ask to see a copy of their insurance certificate,” said a spokesman.

“There are lots of insurers which specialise in drone insurance [so operators should be able to produce it].”

The spokesman said it was was possible damage to property by a third-party drone might be covered as a standard peril under damage by aircraft or aerial devices,but the firm had not seen any cases, so it was still untested.

However, it was important that any farmers operating their own drone contacted their insurer to check if they were covered from a public liability point of view and for any damage to third-party property.

Steven Corfield, head of FBC Manby Bowdler’s Agricultural and Rural Services team, said he had heard of several unreported cases involving drones operated by hobby users, but it was an area of the law that was still largely unproven.

“Drones can cause damage to people, livestock and buildings, even if they are licensed and operated properly,” he said.

“The use of airborne drones has developed at a staggering pace and the legal system is trying to catch up with the regulation necessary to control them.”

Mr Corfield said under Civil Aviation Authority rules any unmanned aircraft fitted with a camera must always be flown at least 50m away from a person, vehicle, building or structure and it must not be flown within 150m of a congested area or large group of people, such as a sporting event or concert.

This meant if someone was flying a drone over a farmer’s yard it would be classified as trespass.

He had been asked by a farmer whether they were within their rights to shoot down a drone if it was over their farm without permission. This was not advisable, however, as the owner of the drone could then claim criminal damage, he said.

A better option was to try to identify if the person flying the drone had a car parked nearby and then take the registration number and report it to the police.