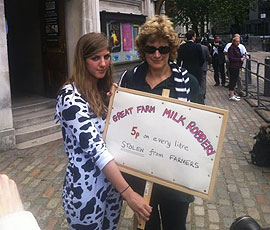 The first farmers have arrived in London to fight back against milk price cuts that will wipe more than £50,000 off farm incomes.

Dairy producers from Wales left Carmarthen at 5.30am to travel by coach for a summit expected to bring more than 2,000 farmers to Central Hall, Westminster.

“The situation is like a ticking bomb,” said Mr Davies, who sells his milk to Glanbir on a cheese contract.

“Production costs are so high these cuts are going to put us out of business unless something is done. No other business would survive losses like this.”

Many producers are tied into contracts that force them to sell milk at less than 25p/litre – even though it costs more than 30p to produce.

The main auditorium at Central Hall – which can hold 2,200 people – is expected to be packed for the summit, which is due to run from 1pm to 3pm.

Those attending will be addressed by farm minister Jim Paice, and representatives from the NFU, NFU Cymru, NFU Scotland, the Tenant Farmers’ Association and Farmers For Action.

“How can milk be cheaper than water? It doesn’t make sense”
Eifion Evans, dairy farmer

“Everyone is looking at a massive loss,” he told Farmers Weekly.

Mr Richards, who sells milk from 180 cows to Dairy Crest, said farmers wanted prices written into their contracts with dairy processors, so they knew how much they would be paid.

It was unfair that farmers were locked into contracts that allowed processors to drop the price at short notice, he said. “We need to get something sorted urgently.”

Nineteen-year-old Eifion Evans, who has returned to the family farm after finishing agricultural college, said it was hard to see a future in dairying.

“We are on a knife-edge,” he said. “We want to expand the herd but unless we receive better prices there won’t be a future.

Mr Evans said his family sold milk from their 100-cow herd to First Milk for 24p/litre.

“How can milk be cheaper than water? It doesn’t make sense,” he said.

Have your say – should farmers dump milk?