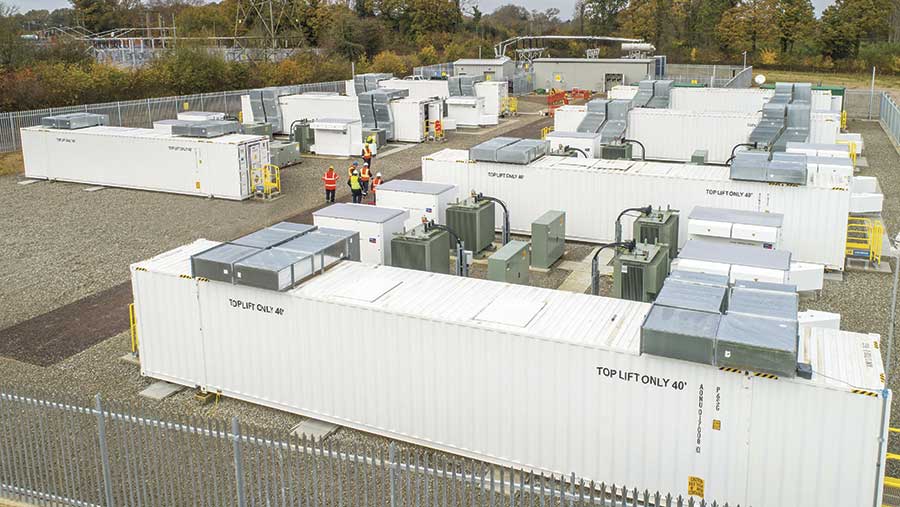 There are fresh warnings for farmers and landowners to be cautious if they are approached about installing energy storage systems on their land.

The battery storage sector is growing dramatically (see box below), with developers keen to secure sites with a suitable connection to the electricity grid.

While this is creating farm diversification opportunities, there is some criticism about the tactics of a minority in the sector as the availability of new sites with spare grid capacity becomes more limited.

The Country Land & Business Association’s land use policy advisor Stefan Jimenez Wisler says some developers may be using more aggressive marketing where there are good prospects for grid connection, while acknowledging this is difficult to prove.

Equally, the NFU’s Jonathan Scurlock expresses concern that some farmers are being asked to sign exclusivity deals for large utility storage projects without any “welcome” reward payment to the landowner, as might apply in a well-worded option agreement.

Exclusivity agreements can give developers authority to apply for a grid connection, which may then be sold on to a third party with no benefit to the landowner.

While more formal option agreements also give exclusivity to a single developer, they can be worded to include some kind of upfront payment to the landowner as recompense for doing so, says Mr Scurlock.

Concerns have also been raised by one independent energy consultant about some “unreputable experts” exploiting the lucrative battery storage market.

Some sites have been several kilometres from the nearest connection point, while others have been on part of the electricity grid not suitable, or lacking spare capacity, for the proposed project, he says.

Any grid application should be tailored to a variety of factors that are different for every business and location. This includes the characteristics of the technology (e.g. import/export capacity, costs, connection requirements) and the factors unique to that part of the network, such as available capacity, he says.

Templated applications not tailored to individual circumstances are less likely to be successful and may also miss out on other viable opportunities, Mr Taylor adds.

For example, finding a site that has access to part of the grid with both import and export capacity for large-scale battery storage can be difficult, but there may be scope for a smaller project, or a different technology, such as back-up generators for grid balancing that only require export capacity, not import.

Mr Jimenez Wisler advises landowners to be cautious about any offer and do some background research on the reputation and track record of the agent or developer before signing anything, particularly letters of authority for grid rights.

“Paying out money to an agent for a speculative grid connection application would be madness,” says Dr Scurlock.

A recent industry report by agency Solar Media says the pipeline for new battery storage projects has increased 240% in the past year, with forecast installations set to rise more than 200% in 2018.

There is reported to be greater interest among developers looking to co-locate battery systems next to existing solar farms to share the infrastructure.