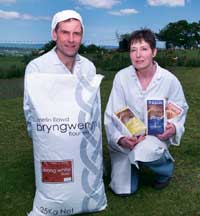 Simon Hedges’ family has milling in the blood – they’ve been making their living from grinding grain into flour since the mid-19th century.

Inside the mill Simon built by hand on his Carmarthenshire farm, he is busy grinding a variety of Welsh-grown grain while his wife, Elizabeth, packs the flour into Bryngwenyn Farm-branded paper bags.

What makes Simon unusual is that he not only makes flour, but he has the technical expertise to build a mill, too.

The components that went into creating the mill at Bryngwenyn came from a mobile unit once used by the Swiss Army. It took him a year to get the mill up and running and he can now use it to produce up to a tonne of flour an hour.

Simon describes it as a hybrid between the traditional and modern. “It is very small, but much of the equipment is the same as you would find in a big factory mill,” he says.

“There are some traditional stones, or rather a milling machine that uses stones. It means we can produce stoneground flour, which then goes through other processes to make it finer and improve the quality.”

Simon and Elizabeth’s decision to establish a mill at their Welsh farm was one made out of economic necessity, although the desire to continue the family tradition was also influential.

When the couple bought the farm eight-and-a-half years ago they knew it was not productive enough to support the family, so Simon continued to work for other milling companies across the UK. This meant spending long periods away from home.

“I got fed up with all the travelling, so it seemed logical to come up with a business that could support us, and building our own mill seemed the most exciting option,” says Simon.

It was a significant investment – the project cost mnore than £150,000 with the benefit of some grant assistance – but it has created a job for Simon on the farm and it could one day generate further jobs.

The mill produces both organic and non-organic flours. Much of the wheat used in the conventional range is grown on Welsh farms while the organic grain is sourced largely from other European countries because of the better growing conditions and lack of availability in the UK.

As well as bakeries, the flour is sold through several independent retailers and an independent supermarket chain

The recession has reduced the organic side of their business and it has put pressure on conventional varieties, too.

“It’s a difficult time for organic and premium value products right now. Craft bakers are going out of business nationally because the trade has swung to value products. This has created a lot more competition among millers,” says Simon.

“Last year’s poor harvest didn’t help because the price of wheat shot up and so, too, did the flour price. But it is looking more favourable this year.”

The mill at Bryngwenyn Farm operates for two days a week, with Simon continuing to work for other milling companies. But when the market picks up again the plan is to increase production.

Simon starts the milling process by mechanically scouring the wheat – rubbing it against a hard screen. The different sized grains are then separated and water is added to prepare it for milling. The addition of water also helps to maintain the brightness of the white flours.

Before the wheat is milled, Simon uses specialist equipment to measure its quality, including the protein, moisture and hardness, as well as the falling number (Hagberg), which measures the degree to which the wheat has sprouted.

“Low Hagberg is a big problem for bakers, as it affects the water retention ability of the bread dough during baking and results in poor, sticky crumb characteristics,” Simon says.

Elizabeth, who farmed in the Cotswolds for 13 years before moving to Wales, assists by packing the flour into large sacks for bakers and into 1.5kg bags for their retail trade. She confesses to preferring other jobs on the farm, such as running the shop and three holiday cottages and looking after the 150 hens, 80 breeding ewes and the Alpacas.

“I prefer to have lots of jobs on the go, but I do get a buzz from going into a shop and seeing it on the shelves.”

One of the local bakeries has just started producing a specialist loaf of bread made from Bryngwenyn flour. Each loaf is decorated with a sheet of rice paper informing customers that the bread is made of local flour.

As well as bakeries, the flour is sold through several independent retailers and an independent supermarket chain. From September, some of the flours will also be available at Asda.

Simon says the Welsh are good at supporting local producers and, despite the economic downturn, this gives him confidence for the future.

With the recession apparently turning us into a nation of bread-makers this could bode well for the future at Bryngwenyn Farm Mill.

Simon and Elizabeth have tapped into the growing interest in bread-making by running courses. Craft baker Clive Mellum works with up to eight students on each course demonstrating how to make a diverse range of breads.

“Our experience with the courses is that they really do bring people together, and all who attend say how enjoyable and useful they have been,” says Elizabeth. “It idealises the philosophy that is a little Continental, that what we eat affects the way we feel and act and I suppose that good bread has a way of bringing people together.”