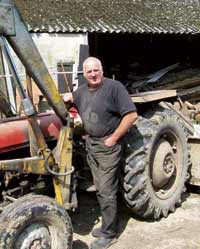 “If there was an Olympic sport for staying put, I’d win gold, silver and bronze,” declares Ben Barton, sitting in his farmhouse at Rodbourne Bottom, near Malmesbury, Wiltshire.

“My family have farmed at Godwin’s Farm since 1898,” he says, pointing out the marks left by each generation on the stone cottage – above one window a line showing the original roof height “in grandfather’s time”, the higher ceiling installed by his parents, and the two windows Ben has put in to let in more light.

“Originally, my family were brewers from Lacock,” he continues. “One branch of the family has done very well for itself with Wadswick [a local horse feed company], but we’ve just plodded about in the mud. When a neighbour’s daughter returned from a trip to Outer Mongolia, I told her the furthest I’d been in the period she’d been away was Wootton Bassett.”

Beneath the self-deprecating wit, there’s pride in Ben’s plodding: in the Friesians his father milked until 1964 and the 140-head traditional beef herd that he ran on 280 acres, until BSE hit.

Today, the 63-year-old is just as on top of his margins as he fattens 22 Holstein-Friesian stores on 40 acres. Mary, the farm secretary, may have to come once a month to “make sense of the accounts”, but I bet it is all there in the large chequebook lying on the morning room table.

And why, if you lived in Rodbourne, would you want to go anywhere else? Like Ben, I’d rather climb Milk Hill in the Pewsey Vale looking for crop circles than go on holiday to Torremolinos.

Ben admits he’s out of step with the 21st century. “I could grump for Britain,” he says. “Me and officialdom don’t get on. They are just waiting for people like me to die off.”

Chapter and verse follows on the iniquity of health and safety legislation, banks and junk mail (“good for firing up the Rayburn”). But the grump comes with a wry glint in his eye that shows an independent, intelligent mind as interested in the politics of the wider world as the local gossip. 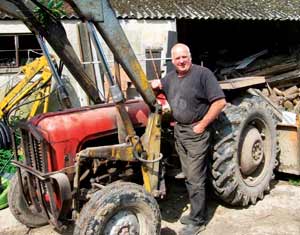 Although rooted in this corner of Wiltshire, Ben is far from being stuck in a nostalgic rut. He calls his a “butterfly” career – opportunities taken as they came along. He started work as a school leaver “shovelling muck” for a neighbouring farm, then moved on to work for what was then MAFF, returning briefly to milk cows before setting up his own drainage company in the county with a friend.

Today, alongside his tenancy, Ben continues land drainage and digger work, lays hedges in the winter, wraps bales in the summer and installs any number of sewage plants in between.

In fact, the 21st century may not quite have caught up with Ben yet. Until recently, he sported a ponytail and I am not entirely sure his baler twine belt wasn’t newly refreshed for the benefit of the beer tent at Great Somerford Show later that day. In its simplicity, his bachelor home is a reminder of a world that has all but disappeared.

“All I need is a Rayburn, a table and a chair,” says Ben, looking round the morning room. His may well be a contender for the untidiest workshop in Wiltshire. “People are always giving me things,” he says. “I put them in the back of the shed and they always come in useful somewhere.”

Betsy, his tractor, and the other machinery artfully dotted about the farmstead may not be state of the art – I left him wrestling with a rusting lawn mower rescued from the back of the shed that had unceremoniously collapsed while he leant on it for a photograph.

But Ben is indispensable to his local community. Christopher Jerram, a land agent at Chesterton Humberts’ Chippenham office, who has known him for 20 years, says: “Ben is a real character and personality. He’s very adaptable and will sort out anyone’s problems, from rodding drains to welding. Full of wit and stories, Ben is reliable in a crisis and well-known for his old-fashioned values. “

A typical day in Ben’s life at this time of year runs like this. Morning: trim trees to allow combine in through gate; afternoon: lay pipe; evening: retire to shed to fiddle with lawnmower.

His social diary is just as eventful. A stalwart of the local skittles team, Ben’s mantelpiece bristles with party invitations from “villagers” and “incomers” alike.

“It’s not them and us,” he says. “Incomers have a different culture, but we have supper together and I’m sure they laugh as much at us as we sure laugh at them.” He also serves on the parish council and has been instrumental in securing the village a direct bus service to Malmesbury.

As he shows me the archaeological site in his meadow, Ben speaks with real passion and knowledge of Rodbourne Estate’s history from Roman times to the present, a subject he lectured on recently at the village hall. If, as the poet William Blake said, it is possible to see a world in a grain of sand, or in Ben’s case a handful of Wiltshire mud, perhaps “staying put” is the wisest move of all.