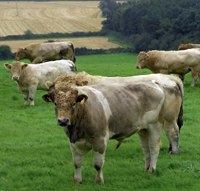 The NFU and Farmers’ Union of Wales have both dismissed calls by Irish farmers and food exporters for a scheme to help counter the damaging effects that the decline in the value of the pound is having on their earnings.

NFU president Peter Kendall said that while he had sympathy for Irish farmers struggling with lowering prices, the proposed sterling equalisation scheme put forward by The Irish Farmers’ Association and Irish Exporters’ Association would go against the principles of the European single market.

“For the many years, when the value of sterling was high against the euro, the NFU did not call for a UK state-sponsored scheme to protect us from imports or to give aid to exports,” he said. “We had to suffer lower prices during these times because we work in a single European market.”

Farmers’ Union of Wales president Gareth Vaughan said a sterling equalisation scheme would amount to export subsidies being applied to trade between member states and he expected the EC to give “short shrift” to the proposal.

“The UK agricultural industry has suffered for many years due to the strength of the pound, while importers into the UK have benefitted. Now the exchange rate favours domestic production our competitors want to distort the market back in their favour.

“I have already raised this issue with the EC’s office in Wales and urged them to dismiss out of hand any prospect of an equalisation scheme.”