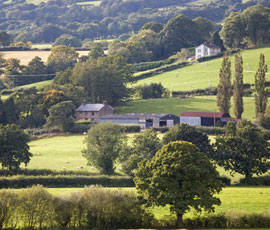 Returns from let farmland and other rural property increased sharply in 2011, outstripping gains from commercial and residential investments and confirming the rural sector’s position as the top-performing UK property asset in recent years.

Figures from the latest IPD Rural Property Investment Index show the sector delivered an overall return of 15.9%, well ahead of the 9% recorded in 2010.

That return was also well above that from commercial property at 7.8% and residential property at 11.3%. Bonds ran a close second to farmland at 15.6%, but equities recorded a negative return of 3.5%, according to the index, which is sponsored by Carter Jonas and Smiths Gore.

The 2011 index is based on 535,000 tenanted acres on 432 estates, so is heavily weighted towards farmland but includes houses, commercial rural property and wayleave sites.

On a three, five and 10-year basis, returns outstripped both commercial and residential property. Rural property also outperformed equities and gilts on the five and 10-year measures, though equities have recorded slightly better, though very volatile, growth in the past three years.

“The ongoing period of macro-economic uncertainty and turmoil has underpinned the need for safe havens for investment, and land has been a beneficiary of this trend. With limited stock available on the open market, prices have risen throughout 2011.”

Mr Liddiard predicted that trend would continue for good land, though he detected some caution entering the market.

“Rural property was once regarded as the Cinderella of the property market. Over the past 10 years that has changed, and there’s no reason why its strong performance shouldn’t continue.”
Richard Liddiard

“Prime farmland values are forecast to continue to rise although at a slower pace than witnessed last year as the amount of land for sale remains relatively low. However, there is evidence of a two-tier market developing. Values of poorer land may decline – people will be looking at the market more closely.”

Nevertheless, land was a tangible asset that people aspired to and could enjoy. That, together with significant tax advantages meant there was little incentive to sell, so supply would remain scarce, underpinning current prime land values.

“Rural property was once regarded as the Cinderella of the property market. Over the past 10 years that has changed, and there’s no reason why its strong performance shouldn’t continue.”

Although land would remain fundamentally a capital hold, Gerald Fitzgerald, head of valuations and investments at Smiths Gore, expected income returns to increase.

“We are seeing a lot of evidence of stronger rents coming through, often of 20% or more. This trend could be sustained or even increase if commodity prices remain relatively high. Many economists believe they have turned a corner and it seems unlikely that markets will fall to levels of a few years ago.”

Diversification opportunities, particularly renewable energy, were attracting increasing interest and could produce attractive returns, he added. In addition, residential income was likely to increase, especially in the south. “Rents are increasing and landlords are refurbishing. Lettings very much reflect the market.”

The outlook was relatively secure, he added, with the threat of large-scale change under the reform of the Common Agricultural Policy receding. “There is not going to be a sudden change in subsidy levels as was initially feared and greening proposals appear to have been scaled back. It also feels like the EU is starting to sort the euro problems out and while the exchange rate is something to watch, it remains well within its 10-year range.”

The basic economic fundamentals of the sector remained secure, he said. “Supply is low, demand is high. The profitability of farming remains high and the outlook good. Even regulatory risks to the sector remain low. The UK government has avoided any kind of rural inheritance tax reform – and if the Labour government neglected to address the situation after 14 years in power, it is unlikely the ‘Con-Dems’ will.”

Mark Weedon, head of UK alternative real estate at IPD, said rural property remained one of the best performing asset classes that IPD measured. As a hedge against inflation it was one of the most secure, he added.

“There are fewer safe capital holds in the UK, with each new economic crisis emerging. For the moment, rural property seems to be in a class of its own.”