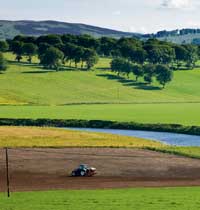 Farmland prices are holding firm, with supply falling well behind last year and demand remaining strong, according to the latest figures from Savills.

The amount of publicly marketed farmland in Great Britain in the 10 months to the end of October was more than a quarter below the same period in 2007/08, with Scotland and the east of England showing the largest declines.

In Scotland, the Borders suffered from a particular shortage of supply, down by 90% year-on-year, said Anna Thomas, head of Savills Rural in Edinburgh.

Non-farming interest had dropped to make up about a third of the market, and local purchasers were outbidding incomers in most cases, she added. “It is still a very active market – land is seen as a safe haven for money in the current market. Low commodity prices are going to have some effect on the general sentiment, but people are taking a long-term view.”

Miss Thomas did not foresee a significant increase in the amount of land coming onto the market, and therefore expected values to continue to rise steadily over the next few years.

Further south, land availability had completely dried up, said David Cross from Savills’ Salisbury office. “We have now sold out. We are seeing some properties for next year but it is very unlikely that much will get launched between now and Christmas.”

Prices had almost returned to 2007 levels, at around £7000/acre, and demand remained extremely strong for larger commercial farms.

“There is demand at all levels. The only area which has been significantly more difficult is where the house has become over half the value of the whole property, due to the more difficult residential market.”

Mr Cross said a number of sales were being completed privately, and had been all year.

“A lot of people have gone into the farmland market over the past decade, who have seen their other businesses hit pretty hard in the past 18 months. Some of them have decided to bail out while the timing is good.” But with strong demand likely to continue into 2010, values would remain at the recent higher levels, he said.