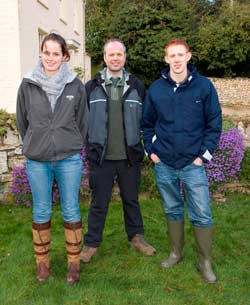 The Farmplanner of the Year competition, organised by the Institute of Agricultural Management, seeks to test students’ ability to think strategically. This year – the 15th year the challenge has run – was no exception.

Student teams were set the challenge of developing a strategy for Overbury Farms to continue as a mainstream farming commodity producer while developing its environmental credentials.

Central to this was the desire of both Penelope Bossom, the estate’s owner, and farm manager Jake Freestone to increase the links between the public and the farmed environment. Students were expected to develop an overall business strategy that accommodated this – and calculate at what cost.

Faced with the conclusion of the farms’ existing agri-environment commitments, the teams were expected to investigate the options open to the farms’ management and how these returns could be maximised should the single payment be withdrawn after 2012.

Mrs Bossom also said she wanted to see the teams’ strategies explore opportunities for renewable energy production on the estate and how that might impact the way the farms were perceived by the local community – “and what the agricultural industry can do to stop being so lamely supported by governments and what can we do to get them to understand and bring rural agri-business and the rural economy to the forefront of the political agenda.”

The livestock enterprise includes 1000 Mule ewes and 250 ewe lambs. Prime lamb is marketed deadweight through the May Hill Sheep Group and sold to Sainsbury’s, with another 200 lambs sold through the estate office to local food outlets.

A former dairy unit was dispersed in 2005, leaving disused cattle housing and some forage stores. The redevelopment of this site within the estate’s strategic objectives was expected to be the core of the students’ projects.

This year’s winning team was also the smallest, with just two students – Diane Cornthwaite and Joseph Ormerod from Myerscough College (pictured) in Lancashire. Diane hails from a dairy and sheep family farm while Joseph’s family business milks 1000 dairy goats. Both are from Lancashire and both have just completed a foundation degree in agriculture.

“The aim was to deliver a profit and maintain a sustainable environmental business including bringing in the general public. But it had to be a flexible business strategy able to respond to changes in the industry,” says Diane.

Both students realised their strategy for Overbury Farms had to enable the business to anticipate change, rather than simply react to it.

“To enhance the farms’ links with the public and gain access to training we’d really advocate joining Farming and Countryside Education. This would also allow the estate to tap into farm visit payments under the Higher level Stewardship Scheme, which would seem the natural next step when the existing ELS and CSS agreements come to an end,” says Joseph.

The students presented the judges – Mrs Bossom, Mr Freestone, Tim Brigstocke from the IAgrM and Clydesdale Bank manager Mike Rowe – with a thorough comparison of how their ideas might perform financially.

For example, they demonstrated how restoration of species-rich grassland on 50ha of permanent pasture could deliver better gross margins than the existing sheep enterprise on that land.

Joseph and Diane also impressed the judges by benchmarking the existing arable and sheep units against industry standards and ensuring everything relevant was carefully costed.

“We looked at a number of renewable energy options including using the arable unit’s oilseed rape acreage to produce renewable fuel. The capital costs of an oil press, and the necessary biofuel processor came to about £10,000 but it could, potentially, power the 135 residential properties on the estate.” The students saw the production of renewable energy as an effective way of enhancing the perception of the farming business among the wider public.

And the judges were particularly enthused by Joseph and Diane’s innovative design for the former dairy unit at Court Farm. Developing the redundant stone barn into a “bunk barn” offering accommodation for 30 people, they planned to generate income from holiday lets but also as an educational centre.

Their figures showed capital costs of £53,000 but a potential return of 9.4% if the project took off.

Click here to see our Farmplanner of the Year gallery

For more on the Farmplanner of the Year competition, watch these videos