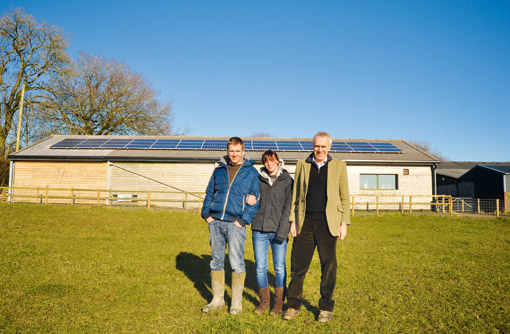 Farmers should not be put off by the recent proposed cuts to support for renewables, as there are many more compelling reasons to adopt green energy, former Soil Association director Patrick Holden tells Paul Spackman

Q. Has the government’s handling of the Feed-in Tariff scheme hurt the renewables sector?

“The FiT scheme is a very good example of how to use policy instruments to drive change. Their introduction was effective and caused a flood of uptake, but to then halve it [the solar tariff] overnight was wrong and sent out very mixed signals and caused confusion.

“I think government mishandled the situation quite badly and shouldn’t be too draconian about future changes. We are still the poor man of Europe in terms of adoption of renewable technology and it needs to make economic sense if people are going to change.”

Q. Is renewable energy generation only ever going to be for those who got in while incentives were highest?

“No, anybody who hasn’t taken steps towards introducing renewable energy systems should immediately think about doing so. Every farm should make a plan for a progressive switch towards renewables.”

“There are lots of motives and government incentives are just one. As farmers we need to wean ourselves off fossil fuels and oil. Over the next 20 years fossil fuels will gradually run out, get more expensive and be more vulnerable to sudden interruptions. Increasing energy self-sufficiency gives some resilience against future unforeseen shocks to the farming business and increases its ability to keep functioning.

“Emissions reductions are another factor to consider. The agriculture and food sector will be at the front line of emissions reduction targets and its entirely possible that a market will develop that rewards producers for reducing their carbon footprint, whether that’s through carbon sequestration in soil organic matter, changes to farming systems, or by introducing simple energy saving measures.

“Until now retailers have focused mainly on greening-up their own businesses, but I think that will change as primary production makes up such a big part of the overall carbon footprint.”

Q. How can consumers be educated about what farmers are doing to improve their green credentials?

“Educating consumers is quite challenging as there are so many mixed messages out there and it’s proved very difficult to establish any carbon footprint labelling scheme.

“I still think it’s essential that people feel connected to this transition though. Own-label foods can obscure the story behind food, so the best way is to buy local, sustainably produced food.”

Q. What technologies will be most suited to farms?

“First choice for many farmers will be solar due to its relative simplicity and potential returns. But try to achieve a mix of energy sources, whether that’s solar PV, wind, anaerobic digestion, solar thermal or ground-source heat.

“But it’s not just about generating energy, we need to look at efficiency too. Every farm needs to think about sustainable energy needs and have its own energy plan.”

Q. What have you done on your farm?

“We installed a ground-source heat pump in 2005, which has transformed the heating of our farmhouse. We’ve also just invested £20k in a 10kW solar PV system on the south-facing roof of our cheese dairy.

“We’d have liked to put a bigger system in, but the farm is at the end of a long single phase mains electricity supply, so was limited to 10kW.

“Luckily Southern Solar got it in just before the 12 December reduction in FiTs. We had to borrow all the money from Triodos bank, but expect payback within seven-eight years. It’s guaranteed income for 25 years, so is a very bankable borrowing proposition.”

Q. Anything else planned?

“Yes. The farm has a complex mix of energy needs. We use electricity to heat water for parlour cleaning and heat cheese vats, while simultaneously we are cooling milk and refrigerating products. These processes all operate independently and use a lot of energy, so we’d like to introduce more integrated system to improve efficiency. For example, heat taken out during milk cooling could be used to heat water for parlour washing.

“We’re also considering a wind turbine and AD from slurry, but will need an electricity supply upgrade to 3-phase to make the most of any investment.

“We aren’t perfect – we’re leaking energy all over the place at the moment, but we want to get to a situation where our farm can be a useful template for other farms.

“The territory is pretty new, we are facing technical and renewable energy challenges, which are very exciting. We need an energy plan which is incremental and efficient and the right scale for our system.”

HOLDEN IN A MINUTE

• Also a dairy farmer in Bwlchwernen Fawr, a 130-acre organic farm about 10 miles from the Ceredigion coast in west Wales