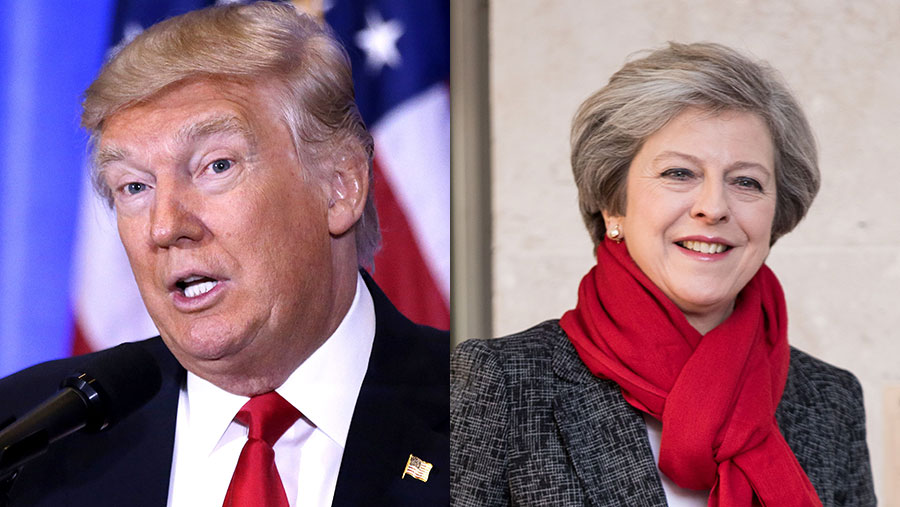 As Theresa May meets new US president Donald Trump on Friday (27 January), concern is growing among farmers that agriculture will be used as a bargaining chip in a future US-UK trade agreement.

Mr Trump has promised a quick bilateral deal with the UK post Brexit and said the country will be “front of the queue” for new agreements.

But with the urgency to secure trade, a number of prominent politicians, civil servants and even newspapers have suggested that UK farming should be offered up to help smooth the process.

The suggestion prompted Tim Farron, leader of the Liberal Democrats, to warn this week that UK farms could face a “perfect storm” of losing tariff-free access to the EU market, while being undercut by cheap US imports.

“Hard Brexit and a free-trade deal with Trump pose a threat to the family farm as we know it,” he said on a visit to Cornwall.

The UK ambassador to Washington, Kim Darroch, kick-started fears last month when he said agricultural protection – which had stalled a big EU-US trade deal – “would simply not be anything like that big a problem for us”.

Speaking on BBC Radio 4’s Any Questions, he said that outside the EU customs union “we would be in a position to say to the Americans you can have zero tariffs on wine, on cars, on beef.”

Farmers reacted angrily on Twitter to the comments. Beef producer Rachel Hallos tweeted: “Hell no!!! Hormone-fed beef in the UK, no no no!”

Meanwhile, the Financial Times ran an editorial calling on the government to fully liberalise UK agriculture by removing all trade barriers, since the US farm lobby would be unlikely to allow a deal without it.

The NFU’s new director of EU exit and international trade, Nick von Westenholz, responded with a letter to the editor in which he wrote: “UK farmers face an increased cost base as they produce food to some of the highest environmental, health and welfare standards in the world – something the UK public truly values. Ruthless pursuit of trade liberalisation puts these standards at peril.”

A determination by the EU to maintain standards has seen free-trade negotiations between Brussels and Washington – the so-called Transatlantic Trade and Investment Partnership – practically grind to a halt.

The US will be hoping for an easier deal with the UK.

The US is one of the biggest beef producers in the world, with significantly lower costs of production than in the UK due to lower environmental, health and welfare standards, and greater economies of scale.

It exports 1.1m tonnes a year, but barely any of this is allowed into the EU due to restrictions on the use of growth hormones.

This issue was aired on Tuesday (24 January), when the chief economist of the American Farm Bureau Federation, Bob Young, told BBC Radio 4 that lobbying for freer access to the UK would be a “top priority”, and that hormone-fed beef and chlorinated chicken were proven to be safe.

In response, the NFU’s strategy director, Martin Howarth, told the programme’s listeners that an equivalence of standards was crucial to any future trade deal. “It would be unacceptable if we were required to import products [produced] using methods and techniques that we’re not allowed to use here,” he said.

Somerset farmer James Wright told Farmers Weekly this made it sound as if farmers wanted a “race to the bottom”, whereas the radio programme had been a chance to put British farming on a pedestal against US agriculture.

In an open letter to the NFU, widely shared on Twitter, he said: “We can never compete with the size and scale of American agriculture and nor should we try to. We have centuries of history of producing great British produce and we should focus on protecting that heritage.”