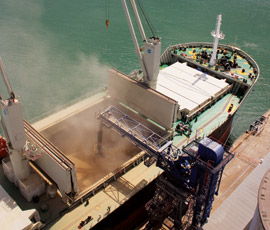 Frontier Agriculture is loading the 27,500t Marina R at Southampton with feed barley for Tunisia this week.


UK feed barley is price competitive on export markets and the sheer size of the crop means that it is likely to remain so, said Andrew Flux, the company’s grain procurement manager.


Most of the export cargoes loaded so far had been for North Africa, he said, and meeting the standard feed barley quality specification had not been a problem.


Provisional census results for England also point to the 2012 crop area being the lowest for 30 years.