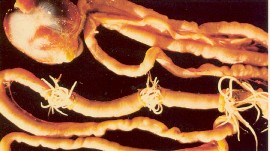 Soaring feed prices make it more important than ever for poultry producers to have a strategic worming programme in place, warned one specialist.

Annual expenditure for worm infestations are thought to have run into millions of pounds before the soaring costs of farm feed. Now it’s even higher, said Dave Cunnah, pig and poultry manager with Janssen Animal Health.

Feed prices had already reached £140/t in August and could increase to a much as £230/t in the coming months.

A survey carried out by SAC Veterinary Services avian health unit found worm eggs on 26 out of 27 flocks. Results concluded that unless free-range flocks are wormed every 12 weeks they stand higher than an 80% chance of being infected.

“The last thing producers need is millions of mouths eroding the economics of poultrymeat and egg production,” said Mr Cunnah.

He urged poultry producers to give worming a higher priority: “It should not be treated as a ‘last resort’ management option.”

Worm infections in birds can cause gut damage, reduce egg quality often at peak laying period and can sometimes cause death.