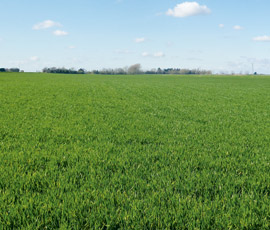 Willow and West Fen farms lie just to the west of March and offer the first large blocks of top-quality fenland to come on the market in Cambridgeshire this year.

The two farms were bought by a Danish investor in 2007 and are being sold following the sale of Hurnbridge Farm in Lincolnshire by the same owner last year.

Lying about four miles apart, both have soils in the Downholland 1 soil series, which is deep stoneless humose clay, calcareous in places, with some peat and deep humose calcareous silt.

An irrigation licence for about 5.5m gallons along with a 1,000t grain store and the absence of any residential value on the holdings will tempt both farmers and investors.

“There’s been nothing like this for quite a while,” said Catherine Scandrett of Savills. “There are very few quality commercial farms on the market; we expect the farms to sell well and we have already been approached privately.”

Recent cropping has been a rotation of wheat, potatoes, sugar beet and the land is in an Entry Level Stewardship Scheme running until February 2016. It has a 1,662t sugar beet contract for which the buyer can apply to British Sugar. (Savills 01223 347 218)