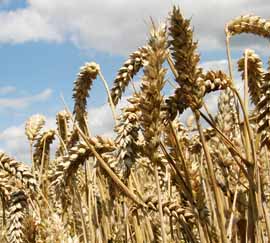 Wheat prices firmed again this week following further rises in the US maize market, where supply is short and recent US Department of Agriculture figures put stocks lower than expected.

London May 2011 feed wheat futures rose by more than £4/t on Monday to close at £203.75/t delivered, and had nudged up to £204/t by midday on Tuesday. Lack of availability is also firming the domestic market in the run-up to the end of the grain year.

Recent price rises were tempting a growing number of farmers to commit some of their 2012 crop at £150/t ex-farm for November 2012, said a Gleadell trader.

Late last week the USDA estimated US maize stocks at 165.6m tonnes against trade expectations of about 170m tonnes. US maize futures prices rose to record levels on the news and prices in the UK followed, although they were also supported by weaker sterling, said the HGCA.

The oilseeds market firmed too as soyabean stock figures were also lower than expected and because plantings are expected to fall slightly, suffering competition from maize. EU oilseed rape prices followed soyabeans higher.

The International Grains Council also forecast that despite a likely record world grain crop of 1,805m tonnes from the coming harvest, stocks were still likely to fall, as this figure was lower than expected world grain consumption.