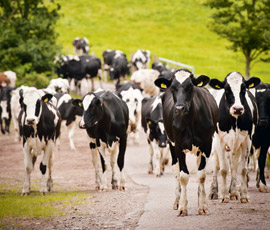 Tightening milk supplies have resulted in Arla Foods launching a new 5p/litre volume incentive and First Milk calling off the threat of a price cut.

After weeks of speculation, First Milk has held its milk for cheese price at 28.9p/litre. Last month the company suggested it would have to cut the price of its cheese contract by up to 2p/litre unless retailers paid more for cheese, sparking dairy farmer protests across the country.

Joining the latest round of milk price rises (see box below), the UK farmer-owned co-operative confirmed a 1p/litre increase on its standard liquid pool price over a two-month period – a 0.5p/litre increase on 1 July and an additional 0.5p/litre on 1 August, bringing the price up to 30.65p/litre.

In addition, following a 3% return on capital investment to members in April, the company said a further 3% return was due later this year as the co-op was committed to paying two returns totalling 6% a year to members.

Joining the race for extra milk, First Milk also announced plans to recruit producers for a new commodity contract. The market-driven contract is only open to new members, and will provide a monthly milk price based on a rolling eight-week average price of skimmed milk powder and butter on the Dutch market.

The milk will be used to produce skimmed milk powder at Westbury, where the company also plans to divert a proportion of its existing milk volume in a bid to boost returns from commodity markets.

Meanwhile, Arla has introduced a growth incentive for all Arla Foods Milk Partnership (AFMP) producers and direct suppliers to its Arla Milk Link Direct and Arla Foods Direct pools who are not already on a retailer-aligned pricing model.

Between 1 July and 31 December 2013 the processor will pay a bonus of 5p/litre on additional production above 2012 monthly volumes. The bonus will be paid on a monthly basis.

Arla said its growth incentive would ensure its farmer suppliers would benefit from the company’s growing milk demand and described the scheme as a more sustainable way of sourcing milk than purchasing it from external suppliers.