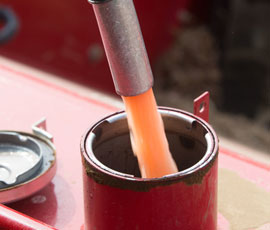 The Suffolk group has seen a fourfold increase in commitment from members to its scheme, taking forward bookings to 3.2m litres this year for guaranteed delivery in July, August and September.

Bookings can be any volume from 1,000 litres but generally range from 2,500-100,000 litres, said the group’s fuel buyer Abbie Lyon, who thought that interest had primarily been prompted by the savings made last year.

While there were no guarantees, fuel prices tended to rise during harvest, she said.

“Those who participated last year saved almost 10% on the cost of their red diesel, around 6p/litre because after we fixed the price at 63.79p/litre, the ‘spot’ market subsequently rose above 70p/litre.

“This year, oil prices have remained strong, partly due to the ongoing political unrest in Egypt, and may go higher.”