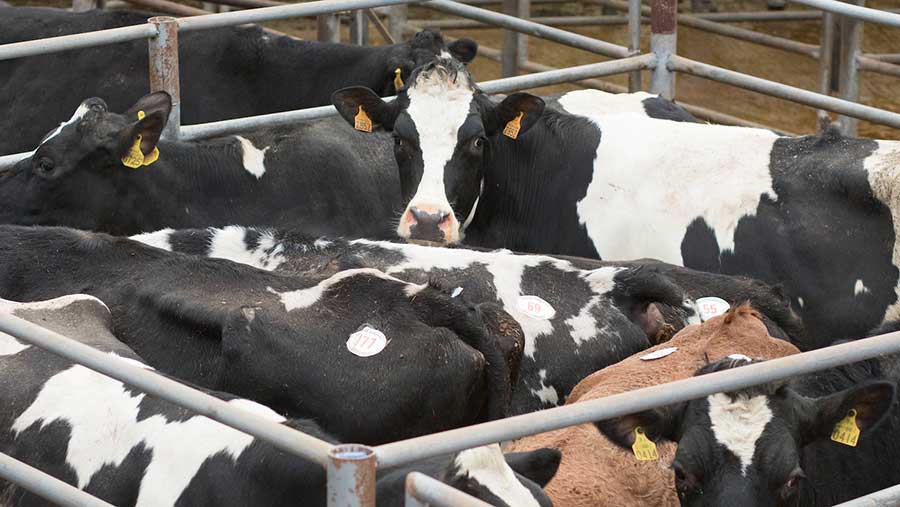 Cull cow prices have surged this year, as the impact of the dairy recovery ripples through to the meat market.

The British deadweight average jumped 4p/kg to 245p/kg in the week to 13 May.

At the marts, the liveweight average was 125p/kg last week – more than a fifth higher than twelve months earlier.

The biggest driver has been lower numbers, with shrinking throughputs across the EU.

According to an AHDB report, the European cow kill rose sharply in 2016, in reaction to stubbornly poor milk prices. This sent the cull trade tumbling.

Since the start of 2017, the market has bounced back and, in every state apart from the Netherlands, prices are up on year-before levels.

Fewer cows have come to market, especially in the UK, where adult cattle slaughterings were down 5% on the year in March, at 50,300 head.

“For the milking guys, who generally pull out cows every week, the milk price is reasonable. So long as they are not problem cows, [farmers] are milking them as hard as they can.

“On the suckler side, the numbers are starting to trickle out. The quality is quite good. There is no real bottom end [-type cows].”

Along with the steadying in the dairy trade, British farmers have also benefitted from supermarkets hungry for cheaper beef and an exchange rate in their favour.

UK shoppers bought 3.5% more mince in the year to 24 April than they did in the previous twelve months.

The Brexit vote and, more recently, the French election have helped the euro gain ground on sterling. This time last year a euro was worth about 77p. This week it was worth just under 86p.

“Post-French election the euro has strengthened, which has helped the export market [for UK beef],” Mr Mahony said. “But the other factor seems to be a shortage of manufacturing beef. There are not the cows coming forward.”