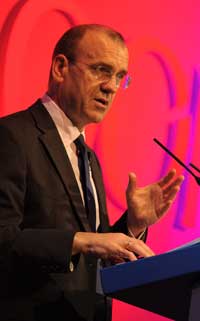 Focusing on the needs of the consumer will be crucial to the future success of the British food and farming industry as the economy emerges from recession.

Addressing this week’s IGD convention in London, Tesco boss Sir Terry Leahy said the one lesson he had learned from previous recessions was “to follow the customer”.

“Your entire focus is on understanding what customers want, and reacting to deliver. If customers change, you must change – whatever the risks. If not, your competitors will change first and take customers from you.”

Innovation was also crucial, said Sir Terry, as was working closely with suppliers and farmers, to explain what changes were needed and how they might benefit.

While some consumers had changed their shopping habits during the recession, many of the longer-term trends would reassert themselves in the coming years, he added. “Consumers are more interested in local sourcing and the fabric of their local communities. They want convenience and choice. And they still want to be healthy and help the environment.”

This message was reinforced by new research from the IGD into what consumers would be looking for from the grocery sector in three years time. 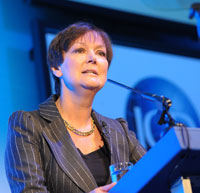 But IGD chief executive Joanne Denney-Finch (left) was quick to point out that this did not mean consumers would be “trading down”. “Shoppers intend to keep changing habits, seeking more from less, and they expect the food industry to keep delivering better value,” she said.

As well as shopping more in discount stores, 37% said they would be buying more local and regional food, 34% would be looking for higher animal welfare standards and 26% would shop more at farmers’ markets.