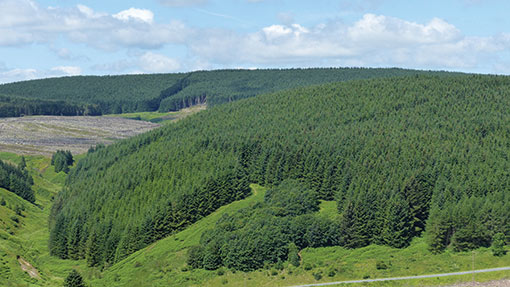 After another brisk year some aspects of the forestry market may be pausing for breath, but the outlook remains positive.


Commercial stands continued to make strong capital growth last year, though the amenity sector is showing signs of a slowdown after a strong run, according to agent John Clegg & Co.


Edinburgh-based partner Fenning Welstead put overall capital growth of spruce plantations at 10-15% in the past 12 months, similar to recent years, with those in the Scottish borders and northern England performing best.


“Values are quite specific to location and links,” said Mr Welstead. “Some areas have also benefited from upgraded or new mills, as the industry invests in new technology and also responds to the increase in demand for biomass driven by the Renewable Heat Incentive.”


Fanna Hill, a 1,123-acre block with mature conifer and younger crops at Newcastleton in the Scottish Borders, recently exchanged for more than £3.1m (£2,760/acre).


The recently launched Mongour Hill Forest, 351 acres of mixed conifers near Banchour, Aberdeenshire, is for sale at a similar price. In Wales, Garnedd Pen-Y-Bont, a 615-acre commercial spruce plantation near Dolwyddelan, Gwynedd, has just been launched with a guide price of £1.6m (£2,600/acre).


Buoyant demand has continued to put upward pressure on wood prices, said Mr Welstead. “This year we’ve seen the average softwood timber price hit £40/t and in the best areas £50/t. Five years ago the average was in the high £20s.


“In real terms wood is still relatively cheap. There are people who think that within a relatively short period of time prices could be double where they are now.”


Current values made commercial woodland an attractive investment in its own right, without the additional tax breaks, he said.


“Spruce on a 35- to 40-year rotation can now produce an annual return of around 6%. That looks quite sensible against a basket of other lower-risk investments, and when you look at the additional benefits and underlying rise in land values, it really starts to make sense.”


The long-term outlook remains positive, he said, driven by strong global demand and a continued drive to source wood from plantations rather than natural stands. This offers a good opportunity for farmers with accessible marginal land to secure some good returns, he added.


Amenity woodland has had a quieter first half of the year, said Thame-based colleague John Clegg.


After five years of strong gains, he was not surprised the market had taken a breather. Over that time woodland had been seen as a safe haven for investors, but, with a returning optimism particularly in the South and East, other sectors of the property market were coming back into favour, he said.


However, activity had increased in the second half. “Owning property is still part of the British psyche, and woodland is cheaper than farmland but ticks the same tax boxes, provided people can show it is managed as a commercial enterprise.


“This is not difficult to do and there is good demand from the biomass market in particular, and we are seeing more amenity woods brought back in to management.”


Location and size are key factors in determining values; generally speaking, the closer to London and the smaller the block, the higher the price, said Mr Clegg.


Four properties new to the market illustrate this well. Priory Wood, just under 19 acres of deciduous woodland near Reading, including maturing oak and mid- to late-rotation beech, is for sale at £120,000 (£6,345/acre), near the top of the market.


The Sandpit Woodlands, near Laughton, East Sussex, includes maturing Scots Pine and mixed broadleaved species over 81.5 acres and is guided at £395,000 for the whole (£4,845/acre).


In Cornwall, Lydcott Wood, almost 43 acres of mixed broadleaf and conifer woodland near Looe, classified as ancient woodland, has a guide price of £140,000 (£3,278/acre).


At nearby Callington another mixed woodland, Tailor’s Shop, runs to just over 16 acres, and is for sale at £3,963/acre.