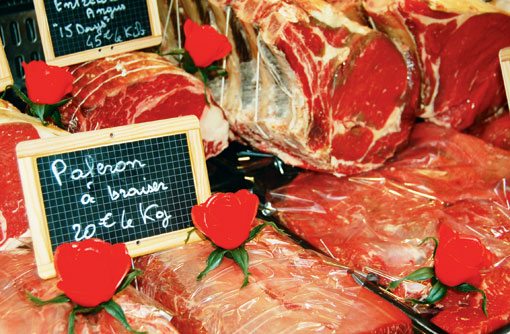 British lamb on a French supermarket shelf sounds like a pie in the sky idea, but it’s the reality with more and more retailers choosing to stock our home nation’s produce.

Last year, for the first time in 30 years, the UK became a net exporter of lamb with France being our largest customer.

Through the use of three different brands – the St George Brand, Scotch Lamb and Welsh Lamb – British lamb is becoming a common sight on many supermarket shelves across France.

The industry still has a long way to go to convince the traditional nationalistic French consumer to switch to British produce, but for the younger consumer the quality of the product, topped with the image of the British countryside is making it a more attractive shopping choice.

“Lamb exports now account for 37% of production in the UK. That’s a lot – we are talking about exports of just under 100,000t a year,” said EBLEX head of trade development Peter Hardwick.

“The stability of the lamb price in the UK for the future is absolutely dependent on the structure of the export market. The common challenge is other competing meats and the consumers’ image of sheepmeat as being fatty and inconvenient.”

The St George brand has been developed by EBLEX to retail English lamb in France and other European countries.

“The St George brand is associated with the quality standard mark. We promote using the term Britannique on the logo because it’s straightforward and the consumers understand it,” said Mr Hardwick.

Increasingly, lamb sold to France is through added-value products and cuts are being sent more often than carcasses, he added. “We send over UK auditors to assess the plants which are processing and packaging the meat.”

Comminucation to consumers is about the quality of the product, along with the assurance behind it, said Mr Hardwick There is no
one single defining feature that characterises ‘English lamb’, which means it does not have protected geographical indication (PGI) status.

“The selling point is the green meadow image of the UK and whole chain assurance,” he added.

The label features a QR code which links through to a consumer-facing website – www.ilovemeat.fr – which features information on where the brand is stocked, when in-store promotions are taking place and recipes.

Scotland has been exporting lamb since the 1980s and has a close relationship with French farmers, exporting lamb at a different time from their production schedule, said Quality Meat Scotland head of marketing Laurent Vernet.

The Scotch Lamb product, which has Protected Geographical Indication (PGI) status, is sold in supermarkets, butchers’ shops and through the food service trade.

“It’s a very tricky business because the French butcher is a very nationalist retailer and we have to convince them that Scottish is a good name. With the PGI branding, its roughly the same price as the French lamb,” said Mr Vernet.

“We are selling more and more primal cuts – it will be cut and further processed and packaged in France under the brand name Agneau d’Ecosse. French consumers are buying into the romantic idea of Scotland and the idea of quality because Scotch lamb is associated with whisky, salmon and the beautiful countryside.

In addition to the French market, Scotch Lamb is sold in the two largest supermarket chains in Belgium.

Around 30% of lamb produced in Wales is destined for the export market with 70% of that going to France, said Laura Dodds from the market development team at Hybu Cig Cymru.

“Traditionally France has been a very important market for us along with other markets like Italy. A smaller percentage will go to the retailer and a lot goes to the wholesale market,” she said.

In terms of price, Welsh Lamb is slightly cheaper than French lamb but at a higher price point than the St George lamb due to the premium associated with the PGI status, she added.

“We have a strong country of origin brand and people are buying into it. One of the key messages we are trying to get across is the versatility of lamb and it’s increasingly a cuts market,” said Mrs Dobbs.

“I think we have a job to do to educate people on the true cost of production of food. We do see that we are struggling in the UK and that’s why the export markets are important for farmers to ensure that their costs are covered. It’s about spreading the risk.”

It isn’t just British lamb that’s being sold across the Channel – a rising number of Parisian butchers are also busy championing British beef, with a taste for matured steak in particular.

Butcher Jean-Christophe Prosper is a keen advocate for British produce, stocking British beef and lamb in his Paris butcher shops.

“British meat can become mainstream in France – if you use Hereford or Angus branding it indicates quality and it’s easy to sell,” he added.

“We serve a lot of restaurants and they like to have this quality. French farmers don’t want to change and they think this is a fashion so they are not prepared to change their farming systems to produce meat like this.”

Find out more about global exports of sheepmeat and other commodities