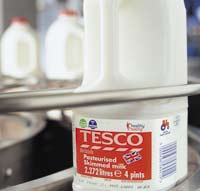 The Office of Fair Trade has renewed its attack on Tesco and Morrisons over alleged price-fixing of dairy products seven years ago.

The consumer watchdog said it had sent more evidence to some of the UK’s biggest supermarkets and dairy companies in an investigation into milk pricing.

In September 2007, the OFT handed out fines of £116m after it ruled several retailers and processors had conspired to force up prices of a number of dairy products in 2002 and 2003.

All the retailers accepted the charges, but Tesco and Morrisons deny any wrongdoing.

The OFT said is had submitted a “supplementary statement of objections” giving extra evidence in support of its earlier findings.

The statement alleged that Tesco “indirectly disclosed to and/or exchanged with” other retailers commercially sensitive information on the price of milk, UK-produced cheese and low-cost butter.

Morrisons is claimed to have done the same over the price of milk.

The two supermarket groups will now be invited to respond to the fresh allegations and the OFT will make a final decision.

“At this stage, it should not be assumed that the law has been broken,” an OFT statement said.

Tesco said it would continue to defend itself against any allegations of wrongdoing.

“We have made it clear that we did not collude with anyone and that remains the position,” Lucy Neville-Rolfe, Tesco director of corporate and legal affairs told the Times.

Tesco would look carefully at the new evidence and continue to help the OFT with the next stage of its long-running inquiry, she added.