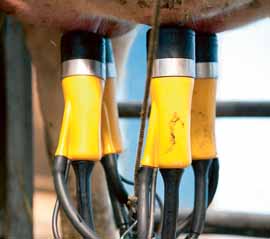 Rapid rises in world dairy commodity prices mean there will be further farmgate milk price increases but the recovery is fragile and depends on how far output rises, warn consultants.

Prices rose again across most UK dairy commodities in February, with wholesale butter reaching a record £3500/t, an increase of 9.4% between January and February, said DairyCo in its latest dairy market update. A weak sterling is helping UK dairy exports and making imports more expensive.

“The tone is up and should stay up for a good while yet,” said Nick Holt-Martyn, operations director of The Dairy Group.

World demand for dairy produce was rising steadily and generally relied on New Zealand to increase output by 2% a year, but that country was just beginning its new production season on the back of a drought, said Mr Holt-Martyn.

Forward prices at the world’s largest dairy exporter Fronterra, which is dairy farmer owned, were higher for next September than last September, but lower than current prices. “If they have a blinding start to their season, the market will quickly fall away.”

Kite Consulting’s John Allen cautions that a very good spring across the northern hemisphere might lead milk production to rise rapidly just at the point where the wholesale price rises may start to meet some resistance from customers.

“However, butter and other dairy commodity stocks are relatively low and if we get any sort of weather threat, that will put more upwards price pressure on the commodity market into the autumn.”

Meanwhile, Mr Holt-Martyn suggests that there are opportunities for small gains in many areas on farm:

• Judicious use of inputs whether feed, fertiliser or labour

• Keep a handle on youngstock numbers – while they add value to the balance sheet they consume a lot of labour when young, feed and finance as they mature

Dairy farm accounts would show that the year just ending has been a very difficult one for most, said Mr Allen. However some buyers were paying well for volume and around 15 to 20% of milk producers, those with the right contracts and doing a good job, were doing well.

Recent producer milk price increases had come just about in time for some, but there was no scope to let up on tight cost control and attention to detail, he said. Targeting feed properly was a good example – it was relatively common for late lactation cows to be fed beyond their requirements when grazed grass over summer would probably do them fine.

“Also, even profitable farms need to watch cashflow carefully and take into account that any restructuring of borrowing will take more budget back up and longer to arrange than usual.”