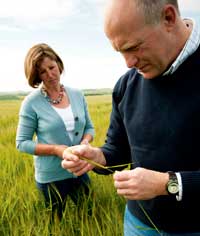 Farming on a windswept hill on the top of the Yorkshire Wolds would not necessarily offer obvious diversification opportunities for many people.

But Tom and Gill Mellor have produced a business which takes advantage of their farm’s unique landscape and its strong regional identity, as well as consumer interest in local produce.

The couple’s 233ha (576-acre) farm is home to the Wold Top Brewery, an enterprise which draws on the farm’s traditional arable business by using barley grown by Tom to produce award-winning beer.

After taking over the family farm from his father in the 1980s, Tom began his first diversification project, rearing free-range hens.

As the first people in the area to try such an enterprise, Tom quickly expanded from 1500 to 20,000 hens, selling them to Noble Foods.

While the hens are now a separate arm of the business and managed by two full-time staff, the success Tom achieved in doing something no one else was doing drove him to think of other ways to diversify the farm.

Having been interested in small breweries and regional beer, Tom started looking into the possibilities of installing a brewery on the farm.

“Yorkshire has such a strong identity, so a Yorkshire beer made sense to me,” he says. “I realised no one was doing it around here and I had the resources.

“We had our own borehole on the farm and I had been growing malting barley for years.”

After visiting a consultant and attending a course on brewing, Tom and Gill invested £130,000, which included a £48,000 Rural Enterprise grant, before launching the brewery in 2003.

From the beginning the couple recognised the importance of strong marketing and branding.

They ran surveys to gauge demand for locally-produced ales and began producing casks of ale for local pubs and shops.

Since then they have widened their customer base to include pubs in neighbouring counties. About a third of their produce is also bottled and sold to shops, delis, restaurants and farmers markets while they also sell a small amount to Asda and Waitrose as part of the retailers’ local food hubs.

They continue to use their own crops to produce beer, keeping the farm directly linked to their diversification project and giving their produce a clear story and identity.

“The 120 acres of barley is sold on a commercial contract,” says Tom. “We buy back the malting barley under a guarantee that it’s ours. It’s great for publicity and branding.

“Most arable farmers think marketing is ringing their grain trader. We learnt quickly what worked best for us in terms of marketing the beer.”

The couple sponsor two local music festivals each year which promotes their brand to people who may not go to pubs and drink beer. They also brew special festival ales to appeal to visitors.

The couple began by initially bottling beer by hand, but Gill says they quickly found they couldn’t keep up with demand so they bought a bottling plant.

The success of the brewery means the couple have had to hire someone to help them in the arable enterprise, as well as six full-time staff in the brewery and a marketing assistant who they meet each month to discuss plans for promoting their beer.

In future the couple plan to increase the amount of beer they bottle. Bottled beer has a longer shelf life so can be sent further afield and be packaged as gifts, appealing to people who wouldn’t necessarily go to a pub to drink beer, says Tom.

So far the plan has worked, with beer now being sent across the country, as well as far-flung places including Italy, Japan and SE Asia, where the Yorkshire branding appeals to customers.

The couple also plan to take advantage of their hi-spec bottling facility by taking in beer from other breweries to bottle.