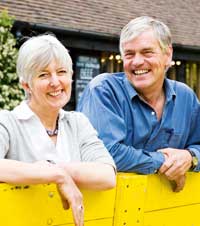 A robbery on their farm more than 20 years ago first inspired Caroline and William Alexander to begin diversifying their arable and beef business.

Having been considering ways to expand their 450ha enterprise in Kent, the Alexanders’ business changed direction when someone stole some hopbines.

“We wondered why people would bother stealing them, then we realised they must be worth something,” says William.

The couple began drying hopbines, selling them on to pubs for decorative purposes.

They proved so popular they began experimenting with different drying systems to dry out other things they grew on the farm.

“We developed a whole range, including more unusual things like peonies and artichokes that our competition didn’t have,” says William. “We took them down to Covent Garden Market in London and sold the lot while we were queuing to see a buyer.”

As well as selling to suppliers, the pair also sold flowers from their farm, building a farm shop in the 1990s as their popularity grew.

Despite several years of growth and success, they realised they had to readdress their diversified business as the market began to stall.

“By the end of the 1990s the fashion for dried flowers kept shifting and the market moved towards flowers from the Far East,” says William.

“I thought the best thing to do was add value to anything else we were producing.”

With that in mind the pair started to stock their own beef and rare variety apples in the farm shop.

At the same time, William and Caroline formed a co-operative with other hop growers to investigate alternative crops.

“We identified essential oils as a natural product as manufacturers were looking for natural ingredients so we saw that as a growing market,” says Caroline.

As part of a co-operative with 20 other hop growers, the couple ran trials of plants for natural ingredients such as rosemary and camomile. They realised their fields were perfect for lavender.

“We ran two acres and went to France to look at what they were doing, bought a machine for the harvesting and it’s gone on from there,” says Caroline.

“Once we had produced our range of oils we could diversify the diversification of the shop. We sell it as an aromatherapy, but also as an ingredient in other products such as soaps.”

However the pair recognised selling lavender as a commodity product would not support the enterprise long-term unless they increased their economies of scale.

“It’s a very competitive market. We needed to add more value to it, so we looked at producing a number of artisan products with local companies, such as lavender icecream, biscuits, jams and marmalades.”

Producing lavender foods proved so unusual that their produce attracted widespread meadia attention. Their lavender essences and oils are used in several Michelin-starred hotels in London.

But the greatest draw to the farm is something the couple had never considered – the field of lavender can be seen from the main commuter railway line to London and the main road.

“It was a crop I didn’t know how to grow so I thought it was a good idea to have it close to me,” William says. “People see the purple fields, drive down to have a look and then come to the shop.”

Fours years ago the couple began holding lavender festivals in the fields, charging people to come on tours of the fields and distilleries. Tickets for this year’s festival sold out months ahead.

Adding to the list of businesses, the Alexanders also rent out farm buildings as workshops and farmhouses.

They also run a successful beef store enterprise, taking youngstock from a family dairy unit and sold as finished cattle to a local wholesale butcher who supplies local shops and restaurants.

The sex and breed of the calves, feeding regimes and stock management are all geared to meet customers’ quality and delivery requirements, with one side returned to the farm to be sold in the farm shop.

“People ask if we sell organic beef. I think the question they are really asking is whether good welfare is involved,” says William. “But, like with everything on the farm, all I need to do is point to the field and show them where everything comes from.

“Everything we do is so closely tied to the farm, and I think people appreciate that aspect.”