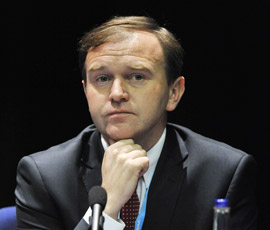 Mr Eustice, 42, has been Conservative MP for Camborne, Redruth and Hayle since May 2010 and is a former member of the Environment and Rural Affairs Select Committee.

Mr Eustice was born and brought up in Cornwall. He attended Truro Cathedral School and Truro School and, on leaving school, attended Cornwall College at Pool.

He has a decade of political experience, first for the anti-euro “No Campaign” as its campaign director between 1999 and 2003 and then as head of press under Michael Howard between 2003 and the 2005 general election.

He was David Cameron’s press secretary from June 2005 until the end of 2007 and was part of his campaign team during the leadership contest.

Mr Eustice unsuccessfully stood as a candidate for the UK Independence Party in the south-west of England during the 1999 European elections.

Before entering politics, he worked for nine years in the family business, Trevaskis Fruit Farm, Gwinear, near Hayle, where the family has farmed for 150 years.

He helped his family to grow 81ha of vegetables, 20ha of strawberries and farm a pedigree herd of South Devon Cattle.

He studied commercial horticulture at Writtle Agricultural College in Essex between 1990 and 1993. He is also a former member of Praze Young Farmers’ Club.

Writing on his website, Mr Eustice said he was “delighted” to have been made a DEFRA minister. He then went on to outline some of the challenges facing farming.

“Agriculture suffers from its share of problems caused by the Common Agricultural Policy and there are some complicated changes about to be implemented,” he said.

“Cornwall has an important farming industry, but there have been huge changes in the 15 years since I left the industry, with a smaller number of large players.

“This part of Cornwall has the most productive agricultural land in the county and is home to Cornwall’s biggest growers of potatoes, cauliflowers and daffodils.

“With a growing world population, food security is once again becoming an issue, so we will need to have a vibrant farming industry in the future.

“I have always been keen to explore ways of making it easier for new entrants to get into farming, because all successful industries need new people bringing fresh ideas.”

Notably, he has also backed Friends of the Earth’s campaign to ban neonicotinoid pesticides linked to a decline in bees, despite DEFRA’s opposition to an outright ban.