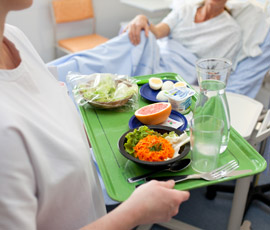 Farmers Weekly has launched a major campaign calling for the NHS to buy more British food for its hospitals.


The Get Better, Get British campaign contacted more than 200 hospital trusts across the UK and put questions to them under the Freedom Of Information Act.


The picture that emerged was of a patchy approach to hospital food buying varying widely from postcode to postcode. Two-thirds of hospitals said they did not know where their food was sourced. It also emerged about 40% of food served to patients was imported.


Campaign director Jonathan Riley said: “With an overall hospital food bill of about £500m a year it means British farming and food businesses are missing out on tens of millions of pounds worth of potential contracts, which are fulfilled with imported food.

“We found that Britain imports large quantities of chicken, vegetables and red meat. It would have been easier to buy it from British farms. It would have been fresher, had a lower impact on the environment and the shorter supply chains involved would have meant better traceability.


“If the NHS really cares for its patients these benefits alone should be compelling enough reason to buy British. But we also discovered hospitals using British food were competitive on costs because fresher food needs less fuel to cook it and the better quality means less is wasted.”


Farmers Weekly also found the NHS has been omitted from government buying standards, which stipulate that food bought for government departments meets certain quality criteria. We are calling for those standards to be rolled out to include the NHS so hospital patients can Get Better.


To promote the use of more British food in hospitals by: