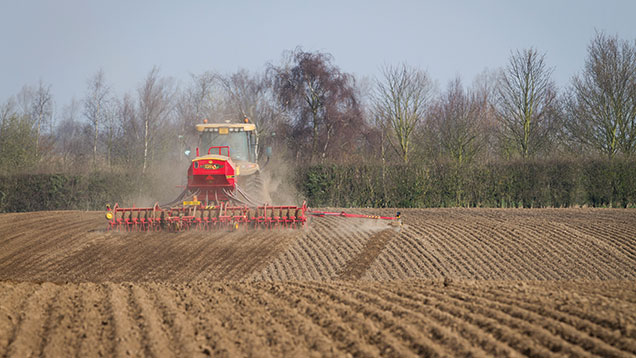 Peas and beans are enjoying a resurgence, with the three-crop rule and decline of oilseed rape driving a big increase in planted area this year.

Bean plantings are likely to be about 30% higher than in 2014, with the pea crop expected to increase by about 15%.

Can the market support this kind of growth without a negative impact on prices?

According to Andy Bury, pulse trader at Frontier and outgoing president of the British Edible Pulses Association (Bepa), harvest 2015 could see the bean area increase by 25-30% on the year, to a potential crop size of 560,000t.

“This growth is a good thing because it will bring back some domestic and export demand.”

Most of the UK’s bean exports will be human consumption beans destined to North Africa and the Middle East, says Arron Mayhew, pulse trader at Nidera.

With the UK’s main competitors being France and Australia, the best time to sell is before Christmas.

“If beans are stored too long they lose their colour, so once the Australian crop is available in January demand for UK produce drops off.”

Beans are also very susceptible to moisture damage in store, so it is essential that farmers have them sampled at harvest, so they know what market to target and whether they need drying, he adds.

“Human-consumption beans are fetching a minimum premium of £25/t over feed beans, and it is a growing market – demand to Egypt is increasing.

“It’s therefore essential that you work closely with your agronomist to achieve human-consumption quality.”

In the main, that means controlling Bruchid beetle damage, harvesting at the right time to avoid staining and splitting, and reaching the required moisture content.

Beans that fail to meet human-consumption specifications will be sold as feed.

“There is increasing demand for beans in aquaculture in Scotland and Norway, and there could be more demand for export to Spain and Italy, but feed prices are likely to be down this year,” says Mr Mayhew.

New crop feed beans are priced about £30/t above wheat futures – equivalent to about £160/t ex-farm for November movement.

“Until we’ve seen the size and quality of the UK and French crops, any market movement between now and harvest will depend on wheat prices,” he adds.

“There are different contracts available – min-max price or futures related – but until the beans are in the ground we’re unlikely to see much demand for new crop.”

The pea market is much less liquid, as most peas are sold on buyback contracts, says Tom Miller, pulse trader at Openfield.

“Marrowfat seed was sold out some time ago, and most farmers will have sold on a buyback contract at minimum £325/t or a fixed price of about £345/t,” he says.

“This year (2014 crop), large blue peas were fetching £210-£250/t depending on quality, but until we know the quality of the 2015 harvest it is difficult to predict where values will be.”
Tom Miller, Openfield pulse trader

Large blue pea prices for the 2015 crop are at a minimum £200/t, but there are very few contracts available at the moment, adds Mr Miller.

“This year (2014 crop), large blue peas were fetching £210-£250/t depending on quality, but until we know the quality of the 2015 harvest it is difficult to predict where values will be.”

Even with an increased crop area, there seems no immediate let up in demand, so prices seem set to stay high for at least the next 18 months, says Bepa in its most recent report.

Micronising peas have been trading at similar values to large blues for the 2014 crop depending on quality, but new crop peas are difficult to value.

“UK supply has outpaced demand recently, with a carryout from the 2013-14 and 2014-15 crops adding to the balance sheet,” says Mr Miller.

“Growers need to maximise quality by timely harvesting as feed peas should trade at parity or a small discount to feed beans.”