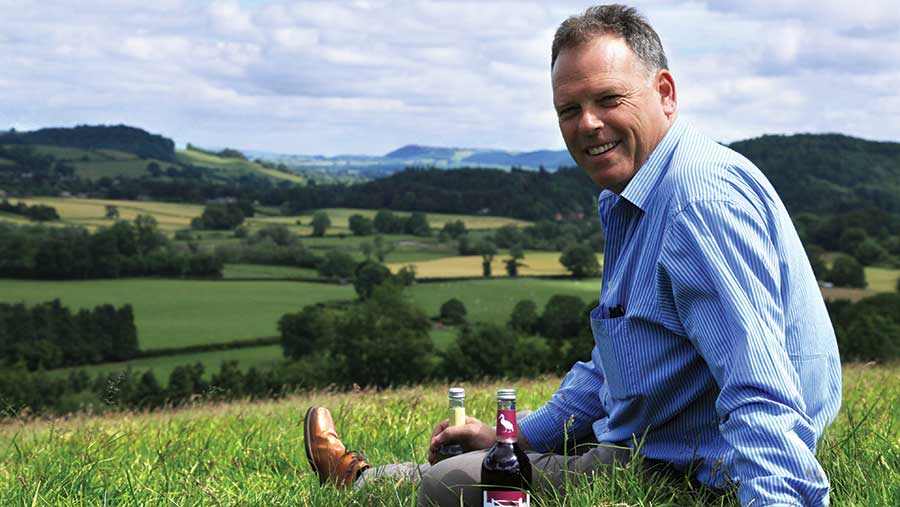 Farm diversification business Radnor Hills Water has just been ranked as one of the fastest growing independent food and drinks companies by The Grocer. Last year it produced 180m bottles of soft drinks and has just ramped up capacity to 300m bottles.

The company, which saw a turnover of £29m in 2014, is based at Heartsease Farm on the border between Wales and Herefordshire and supplies Aldi, Morrisons and Sainsbury’s as well as customers in the food service industry.

William Watkins, founder and managing director of Radnor Hills Water, returned home to work on the family farm in 1988 after studying at Newcastle University.

But after a year he realised his father was coping fine without him and he was slightly surplus to requirements, which left him asking whether to leave the farm to work in the city or start a diversification.

“I wanted to find something that challenged me in the place I loved,” says Mr Watkins. “I always thought the water from the spring on the farm tasted pretty good and it made me think that others might [think so] too”.

It started with cuplets of water (plastic cups with films on top), which the company supplied to airlines, followed by a contract with McDonalds, before the business moved into bottles in 1994.

After 25 years of business, Mr Watkins has learned a lot dealing with retailers. His main tips are:

If you want a retailer to stock your branded products, give them a good reason to do so. Once you have the right product that offers something different, you need the right pitch.

Mr Watkins said it took him dozens of visits to retailers before getting his first product stocked.  “You can’t make an omelet without breaking a few eggs,” he said, “but you have to be persistent and keep asking questions”.

And if you are successful at getting into the retailers, raise public awareness of it to aid sales. Because shelf space is so limited for branded products, it is crucial to market your product well. Mr Watkins says a product that is not selling is likely to be delisted after about six months.

Never let one product or retailer become too big a part of your business. Unless you are one of the major brands, you are unlikely to be able to influence or set terms of trade, so it’s important to spread your risk across customers and products.

Mr Watkins learned this the hard way when, in 2000, McDonald’s moved to a global supplier for its water bottles and Radnor Hills lost its contract. This came as a huge blow because, by this time, McDonald’s accounted for 50% of Radnor Hills’ turnover and 70% of its profit.

“Never overextend financially. Don’t put yourself in a position where you have to accept every job just to keep the machines rolling,” he says.

“The retailers we deal with are very fair. There are retailers I wouldn’t deal with though, for example those with 120-days payment terms. I believe that to be completely and utterly unacceptable.”

The soft drinks shelves are taken up mostly by retailers’ own products as well as the major brands, with about 5% of space left for other private label items. This means working with retailers on own-label products was a good option for Radnor Hills and probably very similar for other food and drink items, he says.

“Producing own-label products for retailers can be a good way to earn money to invest in your own brands because you can often get the bigger volume orders through own-label goods.”

“They are not always the horrors they are made out to be – you can use them to your advantage,” says Mr Watkins, who believes that, by doing both, he can get the best of both worlds.

Be market aware and engaged

Dealing with retailers is very different to dealing with other customers in the agricultural industry. It is a much more dynamic market and you have to be more market aware, says Mr Watkins.

Trends and consumer tastes are always changing. For example, with the soft drinks industry, it has so many influencing factors that you have to be constantly following food sector changes, diet trends and celebrities – even a new film can influence it.

“You have to be at the front of the curve, constantly studying the market and thinking of new products,” advises Mr Watkins. “You have to be proactive and take new ideas to the retailers. They want to be inspired by suppliers.”