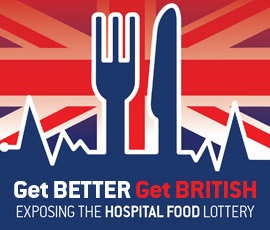 The government must act to stop cheap foreign imports produced to lower standards from flooding our hospital wards.

Government buying standards (GBS) should be revised, made mandatory and rolled out across the public sector to raise food quality, cut costs and give British farmers the chance to compete for hospital food contracts.

The standards were launched in 2011 by then farm minister Jim Paice with the commitment – “central government must source food, subject to no overall increase in costs, meeting UK or equivalent standards of production”.

At the launch Mr Paice pledged: “This is the delivery of a government promise to ensure that we do not use taxpayers’ money to undermine our own farmers’ high standards of production.”

But while the buying standards covered departments such as DEFRA and the Ministry of Defence, only parts of the public sector such as HM Prison Service were included.

The NHS and education, which together account for 70% of the government’s £2bn annual spend on food, were left out.

Instead Mr Paice would only say that the standards were a “challenge to these parts of the public sector to follow suit”.

NFU food chain adviser Lorna Hegenbarth, who lobbies to have the GBS revised to meet British farm-assured standards, said hospitals needed to be made to go down this route.

Since the launch, even though DEFRA said it wanted GBS to be a blueprint for the public sector it has failed to press this aim, said Ms Hegenbarth.

“Without a revised set of standards, properly checked and made mandatory, it still means prisoners can have food procured to higher standards than hospital patients,” she added.

In November 2012 the department published the results of two feasibility pilots, in hospitals and schools, to understand how readily the GBS could be adopted.

But crucially both pilots missed out Jim Paice’s pledge and failed to include meeting UK production standards.

The standards do not cover traceability or food safety either.

“The standards in their current form are flimsy and vague. Food buyers don’t have the guidance they need,” he said.

“The government backed down from its pledge to have food meet British farm-assured standards because it feared UK food would cost more.

“But this is wrong,” Mr Jackson insisted. “Hospitals have been able to save money by buying British and the reduction in transport costs both financially and to the environment are significant.”

He pointed out that the Royal Brompton Hospital saved 2% by buying only UK seasonal vegetables. Scaled up for the whole of the NHS, this would save £180,000 a year on fruit and vegetables alone.

“Compass, the largest food chain company in the world, has argued publicly that mandatory government standards would simplify the procurement process, which would bring down costs to the taxpayer,” Mr Jackson added.

And he said that a government survey showed two-thirds of buyers cut costs by using locally produced food.

“All of the pressure groups are united that GBS should be extended to include hospitals and specify farm-assured standards to provide a boost for British farming,” he added.

“This is completely legal within EU law and would be effective in improving food standards. We must all press together for this and we support Farmers Weekly’s campaign,” Mr Jackson said.