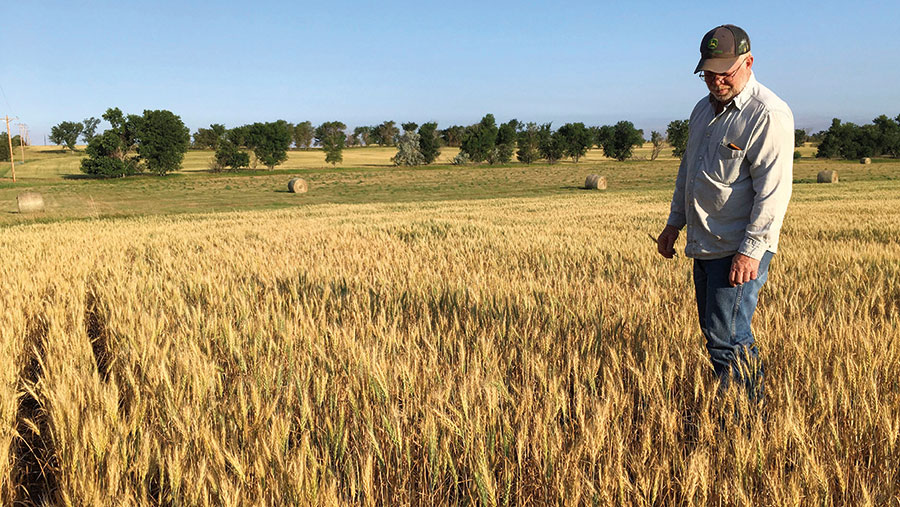 Grain stocks and currency volatility continue to give shape to markets but it’s been adverse weather in the northern US that has created the real interest and price opportunities in recent weeks, writes Cofco International UK trading director Stuart Shiells.

It started in May with hot dry conditions in the main hard red spring wheat-growing states, causing Minneapolis futures to rocket.

This finally triggered speculators to get out of their short (sold) futures positions which have been dominating the market for a prolonged period.

The rally was further fuelled by problems for US corn and soya beans, with both crops needing above average rainfall and cooler temperatures to stop conditions declining further and leading to lower than average yields.

See also: Pulses without pesticides – EFA options if a ban comes in

Alongside these weather issues, the pound’s problems have also worked in favour of UK growers recently.

Sterling fell sharply in July and looks set for an uneasy ride in coming months. This stems from difficulties surrounding Brexit negotiations, making the pound likely to underperform against other currencies.

From a supply and demand perspective, although the world is facing lower production (see world graphic, below), the 2017-18 campaign is starting with 15m tonnes more carry-in stocks for each of wheat and corn than we had at the beginning of the previous season.

Overall, this will reduce the long-term impact of current weather issues, with supplies remaining more than comfortable.

That said, the world has less wheat available so the price lows of last year seem unlikely to be seen again soon. Recent weather problems need to continue or fresh ones develop if markets are to firm again.

You only have to go a few weeks back to the mid-July United States Department of Agriculture report combined with the forecast of more favourable conditions for the northern US, to see how quickly markets can fall without being fuelled by bullish information.

Prices in the UK this year have followed global market trends, very much led by weather in the northern US, Canada and Australia.

Closer to home, hot dry conditions during Spain’s growing season have reduced its crop size, providing potential outlets for British grain. This is good for feed barley, of which the UK will have a sizeable exportable surplus to ship.

Although feed barley prices seem a large discount to wheat at current levels, the UK needs to remain competitive to take full advantage of this demand.

Wheat, however, is facing a much tighter balance sheet. With the UK wheat area down 3% on last year and a tighter carry-in, the situation is much more finely balanced.

Very little wheat export business has been written currently, with UK values too expensive to compete.

Furthermore, corn is cheap compared with wheat  – we are likely to see higher levels of corn imports to the UK this season if this remains the case.

Although there are concerns over supply, these are tempered by high global stocks. The recent higher prices were exaggerated by investment funds exiting their short positions. Now they are out and weather prospects are improving, we may have seen the back of the higher prices for the moment.

Weather will remain a big driver with crops in Australia, Canada and the US still in need of moisture. The August US Department of Agriculture crop report due on 10 August has the potential to add further volatility in either direction.

World grain production will be lower than last year and any further weather concerns could lift markets in coming weeks.

So how is the rest of the world doing?

With global grain markets at one of their most critical stages of the season, weather is the main influence on production potential in many countries. How will it affect the abundant supply situation inherited from last year?

The US Department of Agriculture (USDA) estimates the 2017-18 Australian wheat crop at a more normal 23.5m tonnes compared with last year’s 35m-tonne record.

Trade forecasts, however, based on current dry conditions are closer to 20m tonnes. Rain in the next two months could improve this and development through August will give a better idea of crop size.

That said, with harvest now about 65% complete, some areas are showing better than anticipated yields. Corn production could be 0.9m tonnes less than last year’s 60.7m tonnes.

Current estimates put this year’s Russian wheat crop at about 71m tonnes compared with last season’s record 73m-tonne crop. With large carry-in stocks this season, Russia could have record exports of about 31m tonnes compared with 28m tonnes last year. Mainly dry weather in the south of the country is providing a good window for harvesting.

The 2017-18 Ukraine wheat crop is forecast at 23m tonnes compared with 26.8m tonnes in 2016-17, with recent adverse weather reducing potential. Corn production could also be cut to about 26m tonnes from current estimates of 28.5m tonnes if the dry weather persists, although rain during the second half of July has helped.

The USDA surprised the market in July by keeping corn yields unchanged at 170.7 bushels/acre despite adverse weather through June and July.

The trade is currently estimating a yield of about 166 bushels/acre which could mean a drop in corn production from 384.8m tonnes last year to 352m tonnes this year.

The crop still needs significant moisture for grain fill and the market has been reacting to changing weather forecasts.

The USDA further surprised the market recently with a bigger US wheat crop estimate than anticipated.

Drought conditions in the Dakotas and Montana have severely affected US spring wheat, with condition ratings at a record low of only 33% good/excellent compared to 68% at the same time last year. Production is estimated at 46m tonnes by the trade compared with 62.8m tonnes last year.

The 2016-17 Argentine corn crop was a record 41m tonnes and another near record of 40m tonnes is forecast for 2017-18, giving the potential for record exports of 28.5m tonnes and strong competition for US corn exports.

The wheat area is increasing now that export taxes have been removed and the 2017-18 crop is expected to be 17.5m tonnes, with exports of 11.5m tonnes.

Brazil’s 2016-17 corn crop is estimated at 97m tonnes with a record exportable surplus of 34m tonnes. The picture remains similar in 2017-18 with near record production of 95m tonnes and another 34m tonnes of exports.