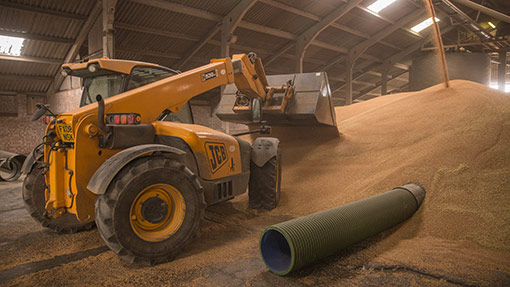 The UK is set to be a major exporter of grain again this year. However, relatively low global crop quality and the strength of the pound are blunting the prospect of producers getting any real benefit from this, particularly in the short term.

There is an abundant supply of average quality wheat from the northern hemisphere’s largely completed harvest. This means the price falls of the summer may continue further before the domestic crop is competitive on international markets.

In fact, looking around the world there is little to suggest any real volatility or supply pressure that could create an upward movement in prices. Latest estimates indicate a 10m tonne increase in world wheat stocks over the previous year and a 16m tonne increase in global corn stocks.

Black Sea crops have seen very good yields with exports suffering none of the predicted disruption from political unrest. Grain logistics in Ukraine remain unaffected, with investors losing their fear of further unrest fuelling price volatility. Meanwhile, the total Ukrainian grain crop (including wheat, barley and corn) looks set to reach 60m tonnes, with average yields up by nearly 15% from 3.22t/ha in 2013 to 3.69t/ha this year.

The Russian wheat crop is up 20% over last year’s with talk of it reaching 63m tonnes this season compared with 52m tonnes a year ago.

Further afield, the South American wheat harvest continues without problem and is now more than 50% complete despite rainfall disrupting early progress. Contrary to fears earlier in the summer, Australian crops are developing well with scattered rainfall over the past month giving much-needed moisture.

From a domestic point of view, after two years of smaller harvests the UK wheat crop looks set to come in at more than 16.5m tonnes – potentially the highest ever – with an exportable surplus approaching 3m tonnes.

So after two years of being a net importer, the UK returns to being a net exporter in one of the most competitive global markets for many years.

Much of the challenge is resulting from events over the channel as much as from those further afield. French wheat is of exceptionally low quality this year as a result of wet weather before and during harvest. Around 60% of the crop is below 76kg/hl specific weight compared with just 12% last year. Protein levels and Hagberg numbers are considerably poorer, too.

Whereas 70% of the French crop would usually be of milling quality, it is difficult to see how much more than 30% will be up to spec this year. The crop has struggled to make the grade for its established North African markets and, consequently, France has been an aggressive seller to any export markets where it can make the grade.

With so much export competition, the UK has had a hard time making sufficient sales so far this season, with export pace being half that required to clear the surplus.

There is no real fundamental news in the market to inspire a rally in prices. We may see short-term jumps when investors buy back positions, but given the volume of global grain which is either in store, or being harvested, any rally in prices will be short-lived.

The unfortunate bottom line is we are going to need to be competitive very soon to gain export business where we have recently been as far as £5/t overvalued.

Given that UK exports are uncompetitive, and the surplus that we face, the need for UK markets to move lower to gain much-needed export business will be a key driver of domestic prices through the busy logistical months of November and December.