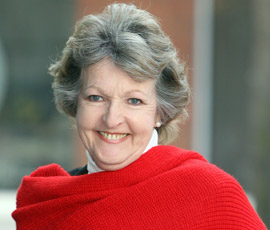 As president of the South of England Agricultural Society, Ms Keith endorsed the principle of British farmers being able to supply more food to patients saying: “As someone who wouldn’t even dream of buying a French apple, I fully support your campaign and think it’s essential we have more locally sourced, seasonal and British food served in our hospitals.”

She was disappointed that her own local hospital, The Royal Surrey County Hospital Foundation Trust, supplied only limited information to Farmers Weekly‘s Freedom of Information request stating that it would have been useful to know how much effort it put into sourcing British products.

Ms Keith, who is a poultry keeper at her home in the village of Milford, near Godalming, is also a patron of Compassion in World Farming and a strong advocate for the countryside. She grew up in London but describes herself “as a country girl” having moved to Surrey 35 years ago.

“I am terribly impressed by farmers, they are so entrepreneurial.”
Penelope Keith

“I am terribly impressed by farmers, they are so entrepreneurial” she said. “When I moved to Milford all those years ago I realised it was only 40 miles from London and yet the main employment was farming. Even today, agriculture is still hugely important to Surrey. It is a thriving agricultural community and not just the gin, Jags and footballer area that people think it is.”

Penelope Keith came to prominence when she played the social climbing character Margo Leadbetter in the self-sufficiency sitcom The Good Life, starring Richard Briers, Felicity Kendal and Paul Eddington. The show focused on neighbours who led very different lives with Richard Briers and Felicity Kendal being passionate about growing their own food and Penelope Keith’s nosey neighbour character constantly mocking their failed attempts.

More about the campaign