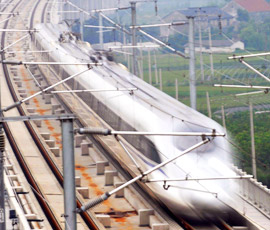 The government has approved controversial plans for a high-speed rail link between London and Birmingham which will cut through swathes of farmland.

The go-ahead for the 100 mile HS2 route, which could affect up to 250 farms, was announced by Transport Secretary Justine Greening on Tuesday (9 January).

In a written ministerial statement, Ms Greening said the plans would be altered to include extra tunnelling to appease environmental concerns.

“I am committed to developing a network with the lowest feasible impacts on local communities and the natural environment,” she said.

“The changes mean that more than half the route will now be mitigated by tunnel or cutting and there will also be a reduction in the impacts on people and communities, ancient woodlands and important heritage sites.”

The government would introduce a package of measures to compensate those who were still affected by the route, she added.

The government says the £17bn project will ease rail overcrowding and generate up to a million jobs.

It also expects the project – which will eventually form a Y-shaped section extending to Manchester and Leeds – to generate £44bn of benefits to the economy over 60 years.

Have your say on our forum on this topic