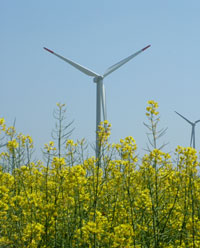 Farmers and landowners could tap into millions of pounds of new loans to help build thousands of wind turbines as part of a government-led drive to produce more energy from onshore wind farms.

The Department for Energy and Climate Change is concerned that a shortage of available credit, caused by the financial recession, has stalled many wind energy projects despite government targets to produce a third of Britain’s electricity from renewables by 2020.

The DECC says three UK banks are working with the European Investment Bank to lend up to £1bn to onshore wind farms in the next three years, as part of an extra £4bn of EIB lending earmarked for renewable energy projects announced in the last budget.

Energy and Climate Change secretary Ed Miliband said: “Earlier this month we laid out a transition plan to a low carbon economy that included a massive expansion of green wind energy. The EIB funds will help the building start on consented wind farms that could provide 1GW of electricity, enough to power more than 0.5m homes.”

Mr Miliband also said the government was reforming planning laws to allow “a significant increase” in onshore wind power. “That is essential for the generation of renewable energy and for Britain to have an industrial future in the production of onshore wind.”

Among the first firms to benefit from £6m of this new funding is Danish wind turbine manufacturer Vestas Technology, which has said it will controversially close its Isle of Wight factory with the loss of 600 jobs because the British onshore wind market is not growing fast enough.

A spokesman for the DECC told FW the loans for onshore wind turbines were designed to get things moving in the sector. “This is aimed at small and medium-sized projects that have been struggling with finance because banks haven’t been lending. There are a lot of projects which have received consent, but which haven’t been able to secure funding.”

“This is welcome and wind turbine projects are looking very interesting at the moment with double-value Renewable Obligation certificates and feed-in tariffs, guaranteeing a price for the electricity you generate. Even the smallest turbines are looking quite promising. But the biggest hurdle is still the planning system.”

Mr Pollock said about 80% of wind turbine projects did not receive a planning decision within the local authority’s timeframe.

Will this kickstart the wind turbine market or is it just more hot air? Have your say on the forums