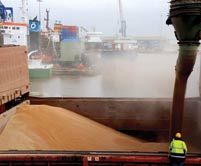 World grain markets are shrugging off the recession with prices rising strongly in recent months as the market fundamentals come into play.

While the world planted area was static at 528m ha, yields were expected to be down on last year’s record crop, he explained.

But global grain consumption was set to rise 13m tones in 2009/10 according to the IGC’s figures, to 1.74bn tonnes, leading to a drop in world coarse grain stocks “mostly in the key exporting countries”.

Demand for feed grains would fall slightly this year, Mr Kitahara suggested, but industrial use of grains – especially maize for ethanol production in the USA – would climb 6% to 256m tonnes.

“The international price of grain has increased strongly since March,” he said, pointing to supply concerns, stronger export demand and the increase in other commodities, notably oil, as well as a firming of equities.

The weaker US$ had also boosted world markets, while a significant upturn in freight costs since the turn of the year had increased the cost of getting grain to the main destinations.

Meanwhile, the fundamentals of demand remained strong, despite the recession, and traded volumes were holding up, reflecting the needs of the world for basic foods.

This message was emphasised by DEFRA food director Brian Harding, who pointed to the fact that, while 1bn people in the world were over weight, almost 1 billion people went to bed at night hungry.

The demand for food meant that agriculture had performed well “against the prevailing wind of recession”.

Looking further ahead, Mr Harding said there was an urgent need to boost food production to satisfy a rapidly growing world population.

In the past, agriculture had responded well by increasing yields. But it now faced extra challenges of climate change and environmental considerations.

This called for a “fully integrated approach to development”, harnessing the latest science, respecting the planet and allowing farmers in developing countries better access to key markets.

The UK would continue to push for a successful conclusion to the Doha Development Round of WTO talks and for further “radical” reform of the CAP.