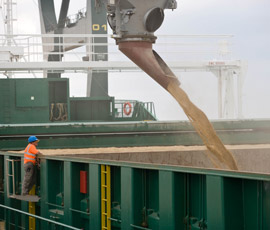 Grain prices have eased slightly over the past week, hampered by the sharply stronger Pound against the Euro, which is affecting export competitiveness.

Spot feed wheat ended the week to Wednesday down by £2.40/t, to around £156.50/t ex-farm, depending on location. Other commodities followed suit, with oilseed rape losing just over £1/t on the week, to around £294/t for spot movement.

International markets were steady, awaiting the US Department of Agriculture’s next global supply and demand report – its first in two months following the financial shutdown last month. “Traders are expecting corn and soybean production to be estimated up,” said a report by analyst Agritel.

Harvest in the US was progressing quickly, with about 73% of the maize crop and 86% of the soyabean area now cut. As a result, physical markets were under pressure as farmers sought to free up harvest storage, it added.

However, Brazil had increased its wheat import quota, by 600,000t, to 3.3m tonnes, said a report by HGCA. This reflected its need to import more from further afield, following lower South American supplies this season.