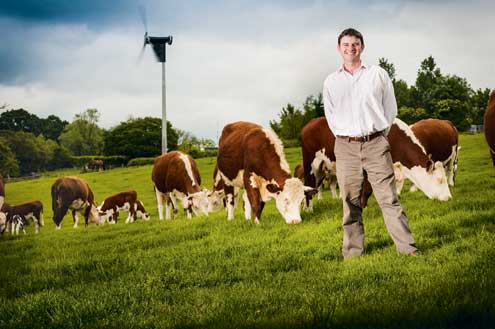 Pioneering new technologies and showing how varied a farmer’s skill set can be, this year’s Green Energy Farmer of the Year finalists demonstrate the many benefits of “energy farming”. Will Frazer uncovers three powerful voices committed to proving the many ways farmers can drive a greener and more prosperous society

Gareth Williams has revolutionised his business to exemplify the many ways farmers can positively contribute to a more sustainable society.

In 2007, when stood on his prime arable land, knee deep in the River Severn floods, Gareth decided to turn his business in a new direction. Scaling back from farming 800ha of arable land, Gareth put his business on track to be resilient to the sort of climate shocks that cost him so dearly that year.

“I’d been playing with bits and pieces for years, but this was a really pivotal moment to do something different. If I am not doing something about it [climate change] to the best of my ability, then I’m not really fulfilling myself as an individual,” he says.

He started with an experimental 12kW wind turbine, which prompted a fascination in energy economics and drove him to make green technology work on his farm.

His next move was to recruit a graduate lawyer from Oxford University to complete a carbon study of the farm. Since the first study, Gareth has completed three further carbon audits, all through graduate placements focused on developing implementable solutions for the business. The graduates have been an important part of the team, with several staying on full-time.

“It provides them with a good stepping stone into the industry,” says Gareth.

As a result, Caplor Farm now supports a range of technologies and practices that cover Gareth’s social, economic and environmental goals.

In three years, the farm has reduced its dependence on grid electricity by 30% through 76kWp of solar PV. This includes a 22kWp system on the roof of the 1,000-tonne, heavily insulated potato store powering the ventilation unit. The potatoes are all supplied on contract to a local buyer, 40 miles away.

As well as saving 30% off the mains electricity bill and reducing the farm carbon footprint by 40t/year, solar PV is also bringing in £25,000 a year through the Feed-in Tariff, adding to the £500,000 turnover from his farming operations. “All I’ve got to do is read the meter, it’s absolutely brilliant and all on a roof space previously doing nothing,” he said.

But Gareth’s ambitions didn’t stop with renewable energy. All tractor drivers have been put through driver efficiency training. They now monitor and feedback all fuel use data, driving competition among farm staff. “Every machine we’ve got is spread-sheeted in terms of its costs and effects,” says Gareth.

Alongside arable crops and potatoes, Gareth keeps 30 head of pedigree Hereford cattle. These are managed on grass to produce heifers that are sold on, primarily to encourage grass-fed livestock systems elsewhere. “I want to show that you don’t need to fill cows full of concentrate,” he says.

Minimum tillage is the cultivation method of choice and has reduced farm emissions by 1t/ha alongside a two-tonne yield advantage for his potato crop through policies implemented to improve soil organic matter.

Gareth has still got a lot up his sleeve. He’s planning an electric under-floor grain drying system powered by solar PV and has founded a community wood heat enterprise that will help support an 85kW woodchip boiler for the farm with local fuel.

He has proven what rural businesses are able to deliver in terms of tackling climate change. And he’s not afraid to tell people about it with 23 talks given in 2011-12, almost one every two weeks.

“I’ve no aspiration to be the biggest farmer in the world, but if I can try things out for the benefit of others then that’s helpful,” he adds.

Marks & Spencer has been impressed with the quality and quantity of entries into this year’s Farmers Weekly Green Energy Award. This is another reminder that renewable energy production and agriculture are perfect partners with a robust economic case.”