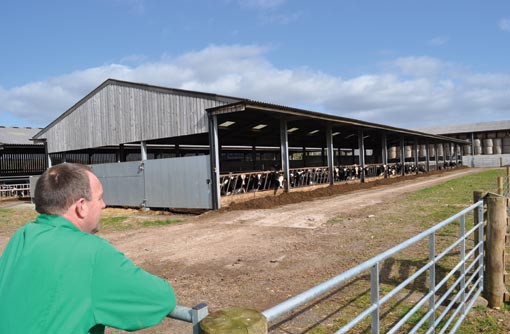 After almost two years of battling through the planning process, Clinton Devon Farms manager George Perrott is understandably relieved that plans for a new cubicle shed have finally been given the green light.

The original plans for the building at the Otter Farm dairy unit on the edge of Colaton Raleigh village met opposition from a small group of local residents, resulting in a potential rejection by planners and a lengthy and costly planning process.

Just under £80,000 has been spent so far on multiple planning fees and reports, and the approval process has taken about a year longer than expected.

“We took on board all the comments from the public consultation, met with opponents and showed them around the farm. We have changed a few things, tweaking the design here and there. At one stage we even moved the proposed location of the building and resubmitted plans, but eventually planners allowed us to put it where we originally preferred.”

Some extra landscaping and tree planting is required to help screen the building from adjacent properties and a number of measures will be put in place to ensure rainwater runoff from the barn does not create a flooding risk.

Filtration tests had to be conducted across the site, along with a Sustainable Urban Drainage report. A soakaway pond will be dug and rainwater harvesting will be installed on the new shed, feeding 60,000 litres of ground storage tanks that will supply drinking water to the cows.

“When you’re looking at paying £1.90/cu m for water to give to cows, it makes financial and environmental sense to collect as much as you can,” says Mr Perrott.

Approval for the unit has been given on the basis that it is only used for winter stock housing between November and the end of April, as one of the main objections was the potential for more flies if cows were housed all year. “As an organic farm we can’t do that anyway, despite the fact it would be ridiculous given that in some years we can turn cows out in January,” Mr Perrott says.

Despite the planning approval, the start of construction is still several months off. Topsoil will have to be removed carefully and under supervision of an archaeologist after a site assessment revealed an ancient enclosure could be beneath the site.

In addition, 300m of a mains electric supply cable has to be buried underground at a cost of £48,000, and badgers have also moved on to the proposed site. “We’ve applied to Natural England to get the sett moved. I’m hoping we can get all of these things done in the next three months and get the site ready for construction to start in the autumn,” says Mr Perrott.

The new cubicle housing will allow Clinton Devon Farms to proceed with plans to expand the dairy herd at Otter Farm to 500 cows – double the existing number currently on that unit.

Cow numbers will be increased from within the existing herd and also by buying in new stock; a combination of bulling heifers, in-calf heifers and some young cows. “We’ll probably need to buy about 150 animals and ideally I’d like to get them all from one, or maybe two, herds, rather than buying them in lots of small groups. It takes less time and is less unsettling for the existing cows and for those coming in.

“We’re looking for organic cows with good health status, particularly Johne’s free, which will inevitably come at a cost. The last thing we want to do is bring disease in, especially considering we’ve just gone TB-free and have put a lot of management practices in place to successfully reduce Johne’s on the farm.”

“We’ll be running the parlour for twice as long each day, probably for about 12 hours, which is a much better use of capital that would otherwise be sitting idle for much of the day,” says Mr Perrott.

“It also proves the farm management team made the right decision six years ago by having the foresight to put in a parlour suitable for future expansion if required. All too often farm businesses make investments like that without thinking ahead.”

The existing 12,000-litre bulk tank will also be retained for the larger herd, although Mr Perrott says the farm will move from every-other-day to every-day milk collection. “It will mean we’ll be washing the tank out more often and spending more on hot water, so we’ll keep an eye on costs.

“If it looks worthwhile to buy a bigger tank then that’s what we’ll do and probably go back to every-other day collection.”

A husband and wife team have been employed alongside existing farm staff to help manage the extra cows, with one responsible for milking and the other for general cow management.

Mr Perrott hopes to be up to full cow numbers by turnout next spring and all being well the new housing should be ready for cows by next autumn, he says.

The expansion of the organic herd at Otter Farm will take total cow numbers across Clinton Farms to 750 once the 250-cow herd at nearby Dalditch Farm is included.

However, Mr Perrott is unsure whether his milk buyer – Dairy Crest – will pay an organic premium on all milk produced, so he is in talks with it and other milk buyers.

“I’m very happy with Dairy Crest and nothing would give me more pleasure than to sell all milk from 750 cows to them for the organic premium. But I’m not sure whether we’ll get the organic contract for that amount of milk.”

If all milk can’t be sold as organic, Mr Perrott is considering converting the Dalditch unit back to conventional milk production and managing it as a stand-alone flying herd, while keeping the rest of Clinton Farms organic.

“Realistically, our organic herd is only going to yield 6,000-6,500 litres a cow a year, but if we could convert some cows back to conventional and go back to using a ration based on maize silage grown on a separate block of 24-28ha, then we could get yields up to 8,500 litres fairly easily and afford to take the hit on price.”

When he renewed the farm’s Organic Entry Level Stewardship agreement last year, it was done with this possibility in mind so as not to jeopardise the whole farm’s OELS eligibility, he notes.

The bulk of Clinton Farms is covered by one application, and there is a separate application for a 40ha (100-acre) block to join Dalditch Farm.

Surplus conventional beef calves from Dalditch would not be allowed into the organic herd so would be sold off-farm, but the use of more sexed semen in the Otter Farm herd should give a large enough supply of organically reared heifers that could go into the Dalditch unit, he says.

Mr Perrott says there is enough grassland across the farm to meet the additional forage demands from 750 cows, even in years where grass growth is limited by dry conditions. However, a new silage clamp will be built at the youngstock rearing unit close to the expanded Otter Farm herd.

Slurry from the additional cows at Otter Farm will go into the existing handling system and 24,000cu m off-site lagoon.

If Dalditch does revert back to conventional production slurry will have to be kept separate from this organic system, so a new on-site store would need to be built, he notes.

Auto-scrapers are to be fitted in the new cubicle housing, along with an auto-shedding system and auto-ID at the parlour, as part of a drive to try and improve labour management and make the best use of farm staff, says Mr Perrott.

“At 100x360ft, the new shed will be a big unit, so it’s vital we do as much as possible to make everyone’s life a bit easier, staff and cows.”

With one eye on the future, Mr Perrott also says the new stock shed could potentially take up to four robot milking machines if that was ever deemed to be the way forward for the business.

“At the moment it’s not something we’re considering at all, but equally we can’t ever afford to throw the idea out completely.”