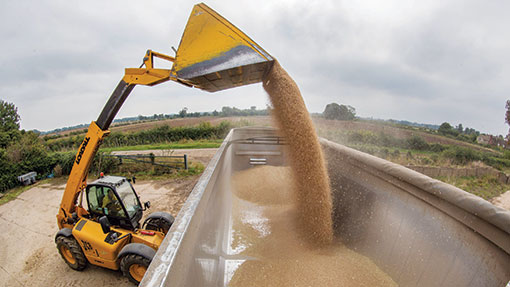 Exports typically account for 16% of UK wheat production and 15% of the barley crop. This year the UK wheat crop is set to top 15m tonnes once more and the combination of the US drought and uncertainties in the Black Sea region mean that the EU is expected to become the world’s biggest wheat exporter in the coming season.

Growers at the HGCA’s Meet the Exporter day at Nidera’s Ipswich Grain terminal were urged to understand which varieties meet the HGCA’s two export classifications, UKP and UKS, in order to get the best from the market.

See also: Grain haulage costs fall overall, but are up for long journeys

UKP is a blend of semi-hard endosperm varieties suitable for EU and non-EU breadmaking requirements, while UKS is a blend of soft extensible varieties well-known throughout the EU for their biscuit-making and bread-blending characteristics. UKS is useful for blending with hard high protein wheats, says export manager Sarah Mann.

“We have tried to move buyers away from variety-specific requirements as there is so much change and it takes a lot to move a buyer from a variety once they become used to it,” says Mrs Mann.

While the UKP and UKS categories offer a consistent quality, each market has specific requirements, such as the 13% maximum moisture requirement of Egypt. This is associated with the challenge of storing dried grain at high humidity.

Identifying key characteristics helps develop markets – for example some UK grain performs a unique function within the dough, giving it an ability to stretch but not spring back, explains Mrs Mann.

The bulk of the varieties going into UKP and UKS are in Groups 1-3 but soft Group 4s have baking potential too, so segregate them if possible – they are not necessarily exclusively feed wheats, says Mrs Mann.

Looking further ahead, new opportunities may arise in Middle Eastern markets and in particular Saudi Arabia, where water shortages mean that wheat production is being abandoned.

India and Australia are our biggest competitors in this respect and while the UK may not be first in line for this business, it could well pick up some trade displaced by the increase in demand from the Middle East.

Wheat output is set to rise to about 15.2m tonnes this year against the poor result of 2013’s 12m tonnes, says said Nidera’s David Eudall.

“Surplus wheat will build in the South and there will be more wheat in the North this year so the northern market will not be so much of a draw.”

Growers within 30 miles of a port are ideally located to regularly supply the export trade, offering easier logistics, often at short notice.

Building a reputation for reliable quality of the right grain in very competitive market is one of the HGCA’s many tasks, promoting UK grain abroad and helping the trade find and develop new outlets.

This activity accounts for just 2.9% of the HGCA’s total budget, raising awareness of the export quality and availability of UK grain as well as supporting the traders by providing quality testing data.

The HGCA is recognised overseas as an official body that improves access to grain buyers, in particular those which are state controlled, as it is seen as impartial and non-commercial, says Mrs Mann. This helps to overcome barriers to trade.

It supports rather than duplicates merchants’ efforts and has built recognition for the UKP and UKS brands in traditional as well as many new markets for UK wheat and barley.

Wheat varieties are tested and selected for inclusion in the classifications, partly through the Chopin Alveograph process, a predictive baking test widely used in overseas markets. The HGCA also trains overseas millers and bakers to use UK wheat, while its team of UK regional managers advises growers and merchants.