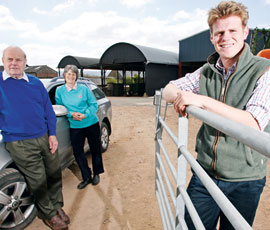 It is a significant and symbolic step in the handing over of responsibility of any family farm business when a son or daughter takes over occupancy of the main farmhouse from their parents.

All too often, however, it is a process that hasn’t been planned well enough and is perhaps done hastily out of necessity, rather than as part of a considered succession plan.

This can strain family relationships and in some cases jeopardise the future viability of the business, especially if non-farming relatives have to be paid off and parts of the farm broken up or sold, says farm consultant Siân Bushell.

“In many families, retirement has become a taboo subject which sadly puts pressure on previously very happy relationships. A lot of the time the son or daughter won’t want to approach the subject for fear of looking greedy, so it really is the responsibility of the older generation to take the lead, rather than the younger ones feeling they have to force their parents out.

“It’s irresponsible of parents if they’ve not sat down and thought about succession. The longer it’s left, the harder it’ll be.”

The most common problem is that the older generation do not realise when it is time to hand over the reins and let a son or daughter move to the centre of the business, Mike Greetham, senior partner at Andersons, says.

“The farmhouse is the hub of activity; family, other people and post all come to the house and parents are afraid that by leaving they will be ‘out in the cold’.”

The situation may be slightly different on tenant farms, where the tenancy agreement can oblige the farming tenant to reside in the main house and prevent retirement until they reach the age of 65.

“It is worth checking as not all tenancies have a residency clause in them. It is best approached in both owner and tenant circumstances by an open meeting to discuss the views, fears and aspirations of all involved,” Greetham says.

The farmhouse is often a family house that is too big for retiring couples and it needs the energy and enthusiasm of the younger generation to use the whole and not “lock part away”.

Taking over from Dad was a big deal

Herefordshire farmer Ally Hunter Blair (pictured above with his parents) knows only too well how physically and emotionally exhausting it can be to take over the family farm and move into the main house, having been through the process last year.

When Ally took over the tenancy of the 200ha farm from his father, he swapped houses with his parents and, at 25, became the sole occupier of the farmhouse he grew up in, while Mum and Dad moved to his house a few hundred yards down the road.

The predominantly arable farm is part of the Duchy of Cornwall estate and it is a condition of the tenancy that the tenant lives in the main house.

“Dad had been here for 46 years, so it was certainly a big deal when I took over. But it’s something that’s always been on the cards and we’ve talked about before, so never really became a bone of contention.”

Despite that, he acknowledges the whole process was tiring, both physically and emotionally and required considerable logistical planning to transfer the contents of a large farmhouse to a smaller property.

“Our situation is quite unique and I was very lucky, but there will always be contentious issues, so you’ve got to talk about it way before you get into the logistics of how it will all work. It doesn’t matter whether you approach the subject formally or informally, it depends what works for your business.”

Both Ally and his parents are partners in the farm business and, while he is responsible for overall management, mum and dad are still both involved in decision making, but at the same time can step back and take it easier at busy times.

“Our tractor driver has been here for the same amount of time as Dad, so between them there’s about 90 years of experience, which is invaluable, especially when you get years like 2012,” says Ally. “Dad may not be living in the main house, but his help and advice is still crucial.

“One of the nicest things about the whole process is that I have moved into the house that I was born and brought up in. I’m only the second generation at this farm, so I’d like to try and keep it going for future generations.”

“Succession planning is best achieved by the son or daughter moving in to the centre of the business and father retiring out of the way,” continues Mike.

Siân adds that the sooner a succession plan can be put in place the better – and ideally business owners should have one by the time they are 50-55.

The key with any succession planning, of which residency of the farmhouse is a major part, is to involve all affected family members in discussions from the outset, she says. These discussions may be formal minuted meetings, or could be an informal chat over the dinner table; the important things are to do what works best for those involved, make sure time is set aside and be open and honest.

“It takes discipline to sit down and talk about something like this because there is always something more pressing to do on the farm. But the earlier you do it, the more choices you’ve got and more time you have to put measures in place to ensure the whole process doesn’t put too much strain on the business.”

It can be useful to involve someone, such as a consultant or friend not emotionally involved, to oversee the process and keep discussions on track.

“It is possible to facilitate a process where the older generation move aside for the younger, but it has to be handled carefully and tactfully,” says Mike.

“The first thing to recognise is that the older generation will always be attached to the business. It has been their life’s work and they have built their self-respect around their position in the business.

“Any talk of retirement or change in status has to be dealt with sympathetically. Farmers are not people who happen to earn a living farming. It is who they are.”

It may also be worth everyone keeping a record of what is agreed, such as in minutes of the meeting or a letter, in case there are disputes in the future, he adds.

“Such personal conversations are difficult to have and people tend to shy away from them, but doing so can cause more conflict in the long run,” says Siân.

Seemingly minor aspects, such as what happens to specific pieces of furniture, plants in the garden or improvements to the house should also be addressed, as these sentimental issues can often become sources of friction further down the line. For example, parents may feel understandably “put-out” if they find that the house they’ve lived in for 30 or 40 years is suddenly being redecorated or refitted with a new kitchen as soon as son or daughter moves in.

Another potential area of friction may occur where a daughter is taking over the farm (and farmhouse) and her husband is then seen as a farmer in the main house, despite not being from that family, Siân points out.

“It can cause some tension among other family members, so again it’s worth getting it out in the open early on. At least if you talk about these things from the start, everyone knows where they stand.”

One way to approach discussions at the outset may be to focus on all the positive aspects of moving/ swapping houses first, rather than getting hung up on the problems, says Mike. “Be aware of the downsides and do as much as possible to mitigate them, but don’t let them dominate the discussions.”

There are a host of financial issues to consider when planning the future for the family farmhouse, not least its capital value and inheritance tax status.

Capital values can often distort discussions especially if other siblings, for example, not moving to the main house feel left out or envious of the one who has ‘got the big farmhouse’.

“People may well naturally feel jealous, but you’ve got to talk about these things. It’s no use excluding people from discussions, as this just tends to cause problems in the long run,” says Siân.

Inheritance tax will be a major concern for many owner occupiers considering handing over the farmhouse. Farmhouses generally qualify for Agricultural Property Relief, but where parents retire to another property not part of the farm, this may not qualify for such tax relief and therefore be exposed to inheritance tax.

Mike says one solution may be for the farming business to buy a property and rent this out to the parents. It could then qualify for Business Property Relief if it didn’t meet the APR requirements, but obviously requires the capital to do so, which will need planning for.

Where bank borrowing is secured against property – either the main farmhouse or an off-lying property – it needs to be covered in discussions, as it may affect the ability to hand it on to the next generation, he says. “It’s another reason to get a plan in place early, so it gives you more time to prepare a business plan that reduces the reliance on borrowing without putting undue pressure on the business and means the bank can release its charge on the property.”

Another issue to consider is the farmhouse’s importance to the farm business and whether its occupants are actively involved in the day-to-day management, he adds.

Where it is central to the running of the farm, it is possible to attribute a proportion of running costs (such as heating and electricity) to the business. “However, in cases where the son/daughter is managing the farm and the parents may have pretty much retired to take a consultancy-type role but are still living in the main house, technically it’s a lot more difficult to justify putting those house costs through the farm business.”

A further consideration when planning for succession, and another reason to start the process early, is that of pension provision, Mr Greetham says.

“Most farmers haven’t got an adequate pension, so the farm business will have to be strong enough to support them for possibly 30-40 years. The earlier the better to start planning for this and getting ‘insurance policies’ in place.”

Tell us what you think about the next generation of farming