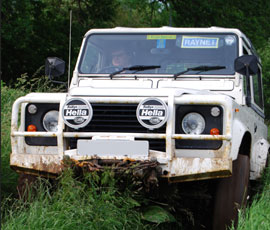 Harper Adams University College finished the term in style last week, as many of its Land Rover owners got together for an off-road social event.

Staff, students – past and present – and their friends were all invited to rev up their vehicles and use the high quality off-road track at the Shropshire venue.

“A lot of staff and students have Land Rovers, but there’s never been a meet-up before,” said Janine Heath, who organised the event. “Therefore we organised this as an end-of-term treat.”

The track, with its various gradients and surfaces, is usually used by Harper’s engineering students. It has been the testing site for all sorts of vehicles, from military ones to cutting-edge tractors, but fun was the name of the game as 20 Land Rovers invaded.

They ranged in type from as early as a Series 3 to as recent as a 2005 Discovery.

Rain prior to the start threatened to stop proceedings, (10 cars didn’t show up because of it), but with a dedicated and ever watchful marshal to keep order, the muddy track simply “made the whole thing more fun”, according to Janine.

“A lot of staff and students have Land Rovers, but there’s never been a meet-up before,” said Janine Heath, who organised the event. “Therefore we organised this as an end-of-term treat.”
Janine Heath

All the Land Rovers had been modified. “Some were absolutely superb while others just made it out of the garage door,” she said. “Those guys tried really hard but they struggled through the whole thing. It didn’t matter though, because it was all a bit of fun.”

Ms Heath said the event will probably become an annual occurrence, as it was a perfect way to relax after a hard year of coursework and exams.

See a gallery of pictures from the event