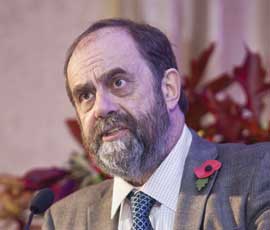 In a letter to the Agriculture and Horticulture Development Board (AHDB), Quality Meat Scotland, Hybu Cig Cymru and the Livestock and Meat Commission, Mr Heath called for the formation of a levy body forum rather than levy repatriation as called for by the devolved meat bodies.

This would be formalised by a memorandum of understanding and tasked with determining meat promotion activities on a GB- or UK- wide basis, he said.

“The English levy body carries out a number of functions beneficial to Scotland and Wales, such as overseas marketing, export certification and research. Initial analysis suggest that the value amounts to approximately £7m a year,” said Mr Heath.

“If Scotland and Wales were left to undertake these activities, it is likely that it would cost the Scottish and Welsh industry considerably more than the amounts advocated for repatriation.”

There would also be practical challenges in repatriating levy money, said Mr Heath, who pointed out there was currently not a reliable means of recording animal movements, particularly with sheep, across the UK.

“I will need a lot of convincing this is not just a fudge – a talking shop and a new avenue for DEFRA to tell everyone how there is no need for change,” he said.

“This has dragged on for far too long – since the Radcliffe review of levy bodies seven years ago. So, while I will reflect on this latest proposal from DEFRA I can’t yet see any sign of one Scottish pound being returned to our farmers to promote their own produce.”

Mr Heath’s letter comes a week after Scottish first minister Alex Salmond waded into the levy row when he wrote to prime minister David Cameron renewing calls for the UK government to repatriate levy money – an estimated £1.4m a year – to Scotland.

French get an appetite for British lamb