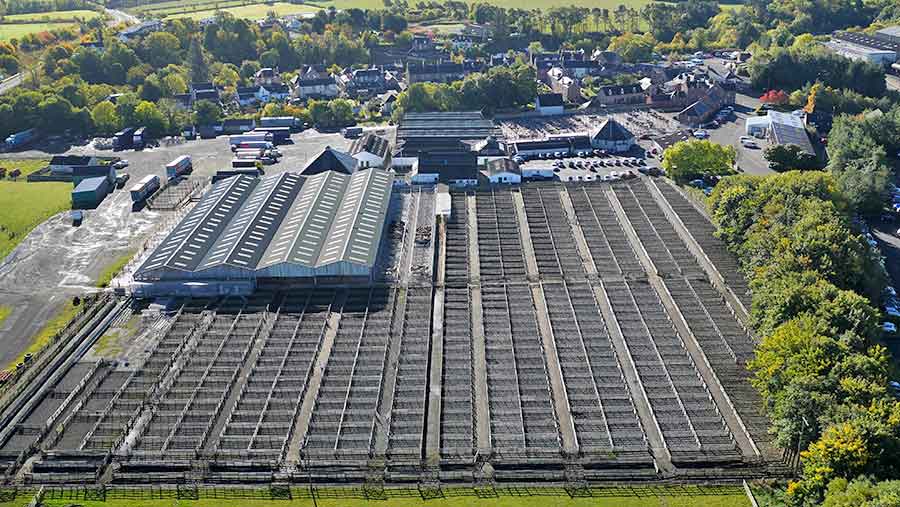 Carlisle-based H&H group has completed a £8.2m takeover deal of John Swan markets at Newtown St Boswells (pictured), in the Borders, and Wooler in Northumberland.

The deal, which was formally completed on Wednesday (14 Oct), takes the number of markets in the H&H group to nine and will increase the value of livestock traded through the business by 35%.

H&H sells £120m worth of livestock on an annual basis, running Borderway Mart at Carlisle, Kirkby Stephen, Lazonby and Broughton-in-Furness in Cumbria; Middleton-in-Teesdale in County Durham; Lockerbie and Newcastleton in Dumfries and Galloway and Roxburghshire respectively.

John Swan sells about £45m worth of stock each year and the deal includes some property in Edinburgh that is understood to have potential for development.

Brian Richardson, H&H chief executive, said the deal was a major acquisition for the company.

The addition of the John Swan business was a “good marriage” in that it brought two profitable companies, with very similar values, together as one, he said.

It increased H&H’s geographical coverage into Northumberland and the Scottish borders, providing new areas for it to develop and increase market share.

“This has been a long process, but it is pleasing that we can announce the completion of the deal, which combines two companies with a long heritage in agricultural livestock,” he said.

“H&H is firmly focused on this sector and will look to develop throughput at the two sites, alongside providing its land agency and rural insurance services to the customers base at Swans.”

Mr Richardson told Farmers Weekly that there would be fresh investment at the two sites at Wooler and Newtown St Boswells, including new IT systems.

The company would also be reviewing the possibility of developing the marts so they also operate as rural businesses centres, as happens at other H&H locations, he said.

All 40 John Swan staff will move across to the new business, taking H&H’s total staff numbers to 315.

James Allen, chairman of John Swan, said the amalgamation of the two businesses would ensure strong markets continued at both Wooler and Newtown St Boswells into the future.

“In these uncertain times it is essential that farming has strong markets to ensure customers get the best possible prices for their stock,” he said.

The announcement about the acquisition came as the H&H group reported financial results for the year ending 30 June 2015.

“This is a solid result and shows the strength of the business in a year that has been more challenging, with lower stock and produce prices for much of our customer base,” said Mr Richardson.