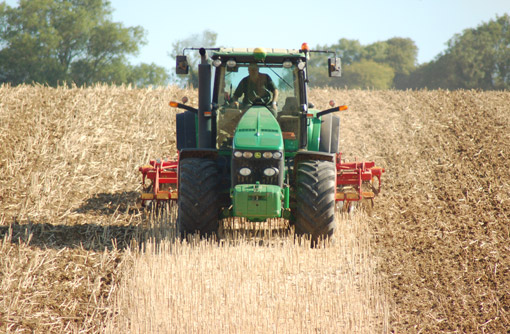 Since the first foray into precision farming six years ago, the systems have become a crucial part of the management at Overbury Farms.

Almost £17,000 a year is spent on the various services and equipment, which include soil mapping, auto-steering and variable rate seed and fertiliser application. But farms manager Jake Freestone is confident that cost is more than repaid by more efficient input use, higher work rates and better yields.

The first venture into precision farming came in 2006 when a 12m Transspread Bredal trailed fertiliser spreader was replaced with a 24m KRM K45. “The spreader had the ability to use variable rates, so we took the opportunity to get the whole farm soil mapped for phosphorus, potassium, magnesium and pH.”

Autotrac was retrofitted to the farm’s John Deere 7820, using the free SF1 signal, and a control box fitted so the tractor could be used for variable rates.

“It was a venture into the unknown for us, so we got someone from SOYL, John Deere and Bredal to the farm on that first outing to make sure we could get the systems working properly. In those days it was quite disjointed because we had separate control boxes and data cards, so took some getting used to.”

A further opportunity to upgrade the precision technology came in 2009 when a staff member retired. “We decided not to replace them and rejigged some of our machinery instead,” explains Jake. A new JD 8530 was bought, fitted with the 2600 touch-screen control system. “It is a big improvement on the brown box control as we can record some information and the colour screen makes it easier for the operator to interpret.”

Variable rate nitrogen application was also tried in 2009 and is now used across the farm. “We’re typically applying the same amount of fertiliser per field, but it is being used in different areas to manipulate green area index. It’s evened up the crops really well and I’ve no doubt yields have been improving.”

The drill has also been upgraded from a 4m unit to a 6m Horsch Sprinter 6. This was initially run with the Horsch controller, but an Isobus cable allowed Jake to do away with the one of the controllers.

A second JD 2600 screen was also bought along with an SF2 licence to use during drilling, where variable seed rates are now being tried. The final big investment this season has been a new JD STS 680i Autotrac-enabled combine with 9m premium flow header and chopper.

“It’s almost panning out for a controlled wheeling system, but we haven’t gone down that route yet. While the staff have been excellent in getting to grips with the technology and various recording systems, I still think controlled wheeling will be too difficult to manage on a day-to-day basis,” says Jake.

The aim is to manage all arable systems through the Gatekeeper farm management software to minimise data entry, Jake says. There have been a few issues getting systems to work together, but generally it works well now and the yield, nutrient and soil maps can be overlayed to help form an overall plan and measure effects.

“It would be very easy to spend hours looking at data, but there isn’t the time, so we have to make it as easy as possible to move data about and analyse it.

“We’ve come on leaps and bounds in six years, so I’d like 12 months of consolidating what we’re doing to make sure we get it right before trying anything else.”

Jake is looking at using the system to overlay financial margin information on to the field maps to see whether variable seed or fertiliser rates have had a positive impact.

A key focus is the variable seed rate system, tried on three fields for the first time last autumn, plus this spring’s barley land. All fields were conductivity tested by SOYL, which then generates an estimated establishment map, from which a seed rate plan (kg/ha) can be plotted.

“In the past we would have used a standard seed rate across the field, but the maps suggest only 60% will germinate in some areas, while in other parts 80% will. This information lets us adjust rates accordingly and seems to have given a much more even crop. It fits our variable soil type well.”

He is also keen to make the most of the yield mapping system and accuracy of data recording during harvest, while plans to use the yield maps in conjunction with P&K maps to create a layered management plan, combining a range of data.

“We’re in an NVZ at the moment, and how long before we find ourselves in a PVZ [phosphate vulnerable zone]? I think it’s also important to demonstrate to the public, government and environmental bodies that we’re using these potentially environmentally-polluting chemicals accurately and precisely to a robust plan.”

The approximate cost of the systems is shown below. With tractors on a four-year replacement policy, the cost of kit is depreciated over that period, although Jake acknowledges it may not always be replaced with the tractor. He reckons annual cost is in the region of £16,800, equivalent to £1.91/t for all variable rate applications and £0.49/t for the hardware.

“It sounds a lot, but I’ve no doubt it’s paying for itself,” Jake says. “With auto-steering for example, given our annual fuel use of 120,000 litres, at 70p/litre we only need to save 3.7% on fuel to pay for this technology. That’s before any other benefits from reduced wear and tear on machines from making fewer passes, labour savings, and better yields.”

Overbury Estate is hosting its annual lambing day at 10-3 on 15 April, giving the public chance to see lambing in progress and about game keeping and wildlife, uses of wool and veterinary issues. The event could attract around 1,000 people. Tickets cost £5 for adults, free for children. Find out more at www.farmerjakef.blogspot.com or follow Jake on Twitter, @No1FarmerJake.