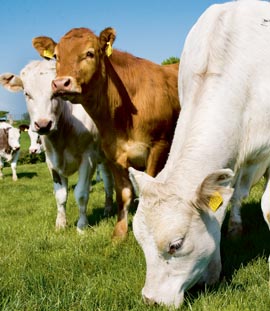 Although the meat trade is playing down a sustained hike in beef cattle prices in the coming weeks, it looks as though finishers can rely on prices remaining strong until early summer.

But wholesalers predict the price rise will be short-lived and are urging finishers not to hold on to cattle to pile on extra kilos.

“The UK is a good place to be at the moment if you’ve got prime cattle to sell, but the higher prices aren’t likely to last beyond the end of May. Finishers should sell cattle at the right weight as soon as possible.

“It’s purely supply-driven because there’s suddenly been a lot less cattle coming on to the market over the last two weeks,” he added.

Other major deadweight buyers were reluctant to be quoted but agreed that there was “no extra demand” underpinning the sudden rise in prime cattle prices which had been firming steadily over the last month.

They say the UK market is stable but there is good trade for lower-value cuts and a steady export demand for specific joints. Lower beef slaughterings throughout the EU are ensuring a buoyant export market for UK beef.

Although wholesalers concede that prime cattle prices aren’t expected to drop significantly – even under the weakening influence of the summer demand – they don’t predict the upward trend will continue at its current rate.

The heifers were sold deadweight and classified U+4L. Average carcass weight was 340kg and they made £3.15/kg.

“At least we’re seeing a decent return but costs have rocketed. We need these prices to be sustained and to keep ahead of rising costs of production,” said Mr Bowman.

Some auctioneers believe the mild spring weather and good grass growth has driven producers to turn cattle out to try and reduce final finishing costs – a decision that has exacerbated the shortfall in supply. How prices will be affected by the anticipated increased marketings of prime bulls expected in May and June is another question facing finishers.

Nick Allen, sector director for EBLEX, said it was encouraging to see the beef price break through the 300p/kg barrier. “It’s an inevitable consequence of shortened supply and rising costs of production. It’ll bring beef farmers closer to a sustainable price and we believe it’s a trend that will continue. Prices for all meat proteins will rise as they are driven by rising costs, particularly in terms of cereal prices and a global shortening of supply.”