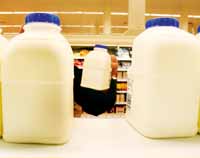 That was the message from market analysts and industry experts at the Agriculture and Horticulture Development Board (AHDB) Outlook conference in Westminster last week (27 April).

High commodity prices should give dairy farmers good reason to be confident, DairyCo market intelligence manager, David Swales, said. “The price for butter is at record levels of around £3,250/t. Skimmed milk powder is at £2,200/t and continues to rise.”

This had started feeding back to UK farmgate prices, but there was potential for improvement, he said. The average UK farmgate milk price was 26p/litre, although the market indicator AMPE (Actual Milk Price Equivalent) had reached 32p/litre, he said.

One positive sign in the UK has been a “raft” of contract price increases over the past three months, compared with very little movement in the previous quarter.

Mr Swales said UK milk production for the year to April 2011 ended 4% up on the previous year at 13.3bn litres. This bucked the trend of the last seven years, which had seen production fall from 14bn litres to 12.8bn last year. World production also increased, by 1.7%, although it was slightly behind the 10-year average – the only sign that the strong growth in the global market may be starting to slow down, he said.

Kite Consulting’s John Allen speculated whether UK production could climb to 15bn litres by 2020. Since 2007, prices had been increasingly volatile, but rising. However, escalating costs meant higher prices did not necessarily equate to profit, he said.

If production was to hit 15bn litres, herd numbers would continue to contract, but herd size was likely to increase, he predicted. “That’s the big one – without quota the economics are very strong towards driving producers who are efficient to expand.”

But to deliver significant production increases would take more than just farmers who could compete at world market prices, he said. “We need to accept diversity. An industry producing 15bn litres has just as much scope for small and organic herds as one producing 10bn. If consumers demand it, they should have it.”

Efficiency with capital expenditure would be key for producers, while processors needed to focus on export markets, he said.

About half of UK milk use was liquid, compared with 23% across the EU and just 3% in New Zealand, Milk Link director Shelagh Hancock added. “Commodities have become the new added value.”

Profit priority for beef and lamb

Beef producers can look forward to a period of firmer prices, predicted AHDB senior analyst Mark Topliff. “Since July last year less black and white calves have been kept because of high cereal prices.” This has brought the finished cattle price to nearly £3/kg deadweight, and supply is likely to remain tight over the next 18 months. The picture for lamb is similar.

But this was no recipe for expansion, he said. “Even at these higher prices, EBLEX costings show there are few suckler herds in profit if you discount subsidy. For finishers it depends on your costings – if you use high amounts of cereal and fertiliser, your profits will be squeezed. Look carefully at the economics before expanding.”