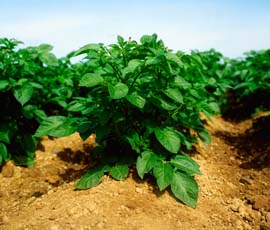 GB potato production increased by 3.5% this year, to just over 6m tonnes, according to the Potato Council’s provisional estimate. Although total plantings were the lowest since 2005 and 0.4% below last year, at 126,328ha, average yields were the highest since 2002, at 47.9t/ha – a 3.9% increase on the year.

“With the dry and warm conditions many crops produced good yields and in general a bolder crop than last season,” said the council’s latest report. “As a result ample supplies were available with many varieties ready ahead of last year.”

“Prices for best grade one packing whites have shown upward movement as packers look to secure quality stocks for immediate use and in the run up to Christmas,” said the report. “With some growers keen to move ambient stored stocks, the gap between general packing and grade one material has widened.”

In the bag market, trade was slow, while in the chipping sector contracts were dominating movement, with many growers with quality stocks reluctant to load from store.