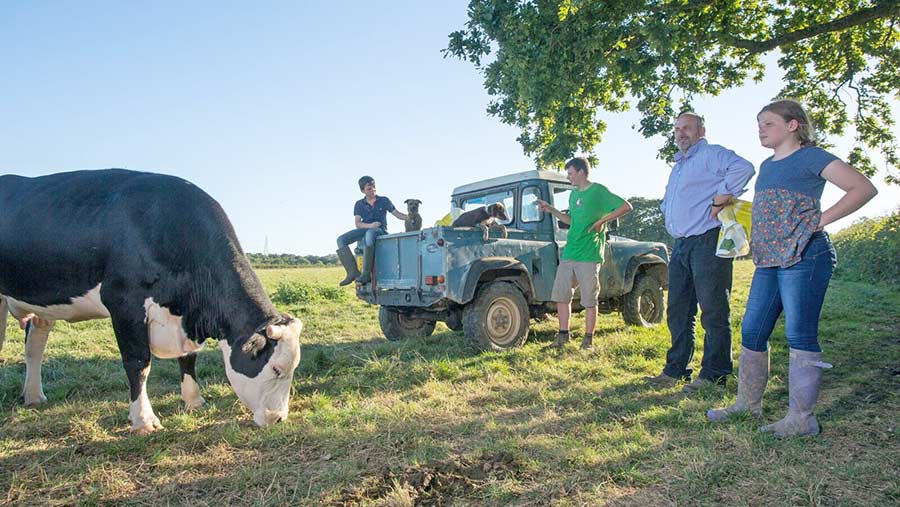 Buying farmland is a hurdle too high for most young farmers and new entrants.

The average acre of land costs four times what it did in 2003, meaning most will only ever work in agriculture, rather than own their own unit.

For those who do target ownership, a mortgage is the most likely solution for them to be able to realise their ambition.

But with small starter farms costing upwards of £700,000 and a typical agricultural mortgage offering 60% loan to value, hundreds of thousands of pounds are required to meet the required deposit.

Growing a business steadily, with staged borrowing and careful planning may be a good alternative, according to Jon Drew, regional agricultural manager for AMC.

He says lenders are primarily interested in affordability, so as well as having a thorough and professional business plan, applicants should also think about drawing income from non-agricultural sources.

“In commercial lending you are looking at the trading history to satisfy yourself that the client has a reasonable track record of generating a certain level of profitability to service borrowing,” says Mr Drew.

“But when you are looking at new entrants you are not always talking to people who are already in business.

“Ultimately lenders need to feel comfortable that the level of repayment is affordable. The starting point for that may well be salaries from jobs – either agricultural or non-agricultural – and their level of expertise and experience in running a business.”

A business plan is key; one that’s detailed, concise and realistic.

This will allow lenders to judge whether repayments are going to be met.

It should set out the projected financial incomings and outgoings for the next three years.

Mr Drew says lenders are not primarily lending against the farm or land being purchased with the money, although its value is obviously important.

“We are more interested in the income available to service that borrowing, which is a much more sustainable way of doing things.”

The mortgage application process is not a job interview, but there are similarities.

An applicant’s ability to present a good plan is as much about selling themselves by outlining their skills, experience and qualifications.

“People generally underplay how much experience they have,” says Mr Drew.

“If you have worked on five different farms and you are used to running big machinery or organising teams of people, that experience should not be underplayed.

“That is your personal capital.”

Young farmers can gain trust by being open, honest and building positive relationships with lenders.

Mr Drew says that lenders will take into account if an individual has worked well with their bank in the past, conducting their finances sensibly and staying within agreed limits.

“People tend to think that when they borrow from big institutions that they are just a number,” says Mr Drew.

“Speaking as Lloyds, which is a large lender, we think building trust and relationships count when someone is asking for a substantial sum of money.”

Be clear, use evidence

Most lenders will look for a business plan that forecasts the first two to three years.

“Looking beyond three years is more about a vision than a strategy because there are more variables being introduced,” adds Mr Drew.

All assumptions should be very well presented and thought through.

Invest carefully and be realistic

Agriculture is a capital hungry business and tends to be quite low yielding.

Mr Drew advises that first-time applicants need to be realistic about the funding they have and keep a keen eye on what they are doing with it.

Lucinda and Peter Morgan started small and grew their farm business in stages, setting up 21 years ago with 40 sheep and about 50 acres of rented land.

But they have grown to run more than 320 acres with a free range egg, sheep and beef enterprise at their own Dunstars Farm near Cowbeech in East Sussex.

Borrowing at various stages to develop small-scale enterprises that only required low levels of capital was the strategy they employed, using salaries from non-agricultural careers and borrowing against assets from an engineering business set up in 2010.

“We needed to provide a set of accounts proving the viability of the farm business,” says Mr Morgan.

“It’s also important to accept that, even for our size of farm in this part of the world, diversified income will carry on being a fact of life.

“All our farmer neighbours have secondary businesses – whether that’s a farm shop, contracting or selling farm supplies.”